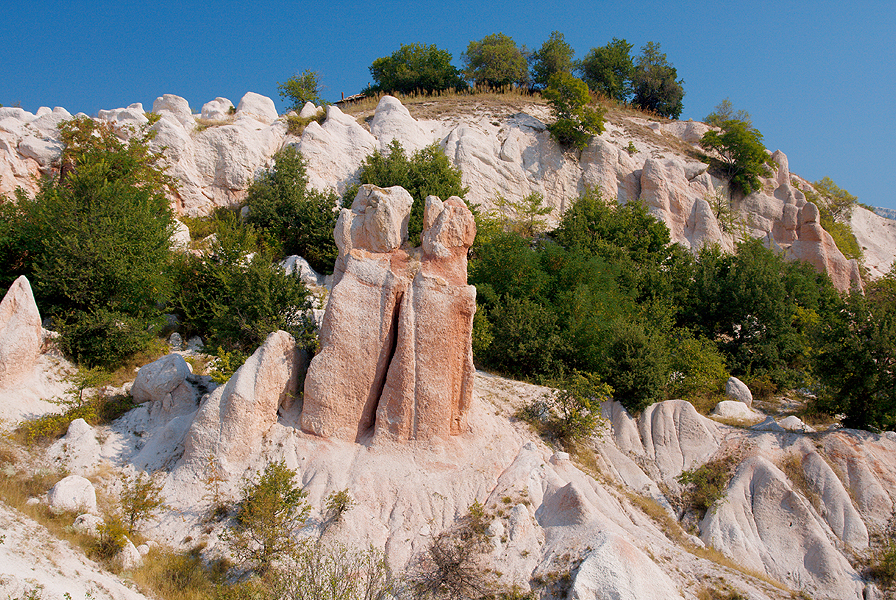 The natural landmark called The Petrified Wedding (the Stone Wedding) is located about 4 kilometers east of the town of Kardzhali, near the village of Zimzelen. Along with the stone mushrooms located near the village of Beli Plast, it is one of the most interesting rock formations of the so-called Kardzhali pyramids, located at the Kayadzhik and Chukata ridges in the eastern Rhodope mountain. The rock formations reach 10 meters in height and lie on an area of 50 dca.

According to the scientific hypotheses the Petrified Wedding started forming 40 billion years ago, due to underwater volcanic activity, which formed the rock rhyolite tuffs. Later, after the sea receded, the rocks were exposed to rain, wind and sun, which formed them to their current shape. Various minerals in the rock are the reason for the diversity of colors and shades of the rocks.

The name of the phenomenon was given due to the fact that the rock formations look like people, gathered at one place. According to the legend, a young man from the village of Zimzelen fell in love with a girl from a nearby village. During the wedding, on the travel to the village of Zimzelen, a strong wind blew off the veil of the bride. Her indescribable beauty made the guests speechless, and the father-in-law felt jealous of his son. The natural forces petrified everyone for the impure thoughts of the father-in-law. Only the groom lived, crying bitter tears, begging the wind to petrify him too. The elements fulfilled his request and the phenomenon The Petrified Wedding stands to the present day near a puddle, which is believed to be made of the tears of the unfortunate groom.