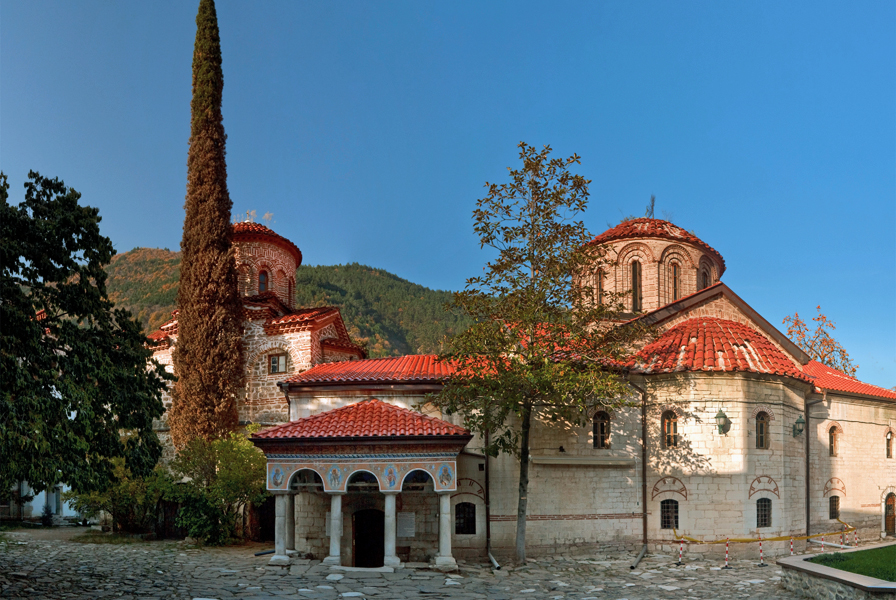 The Bachkovo Monastery “Assumption of the Virgin” is located in the southern part of the village Bachkovo, 10 kilometers south of Asenovgrad. The monastery was founded in 1083 by the Georgian Gregoriy Bakuriani, who donated the land. For a long time the monastery was Georgian. The two-story ossuary some 400 meters from the monastery was built during the monastery’s earliest days.

At the end of the 12th century and the beginning of the 13th century, The Holy Archangels Church was built, for services during the winter months. It was attached to the terrace on the second floor of the west wing where the monks had their cells.  It is thought that after the fall of Bulgaria to the Ottomans at the end of the 14th century, Eftimiy, Bulgaria’s last patriarch, was exiled to the Bachkovo Monastery.

Construction on the new monastery began at the end of the 16th century, most likely with the eastern wing and the fortified main entrance. In 1601,  the southern wing was rebuilt, where the refectory now stands, with its spacious dining area and marble table. Visitors will note that the year of the table’s construction is carved on it. In 1864, a mural was painted on the northern wall of the dining hall, “The Presentation of the Miraculous Icon.” In 1604, The Assumption of the Virgin Cathedral was constructed, which has three naves, an apse, a narthex, and a cupola.

In 1833, the vegetable garden was expanded and new gardens were planted. From 1834-1837, a third church was built, dedicated to Saint Nikola. The famous Bulgarian icon painter Zahariy Zograf (1810-1853), executed the images in the church’s interior from 1838-1840, and in 1841 he completed the frescoes on the exterior of The Holy Archangels Church.

In the cathedral there is an icon from 1311 known as The Holy Mother of God Icon, with a silver repousse cover. This icon is believed to have miraculous powers.

Visitors to monastery may also view other icons, silver repousse covers for copies of the Gospels, and other works of art from the 16th to the 19th centuries. Treasures from the 17th century include a carved wooden icon stand with gold ornamentation and the cathedrals royal doors. The Bulgarian Exarch Stefan I (1878-1957) is buried at the monastery, as is the Bulgarian Patriarch Kiril (1901-1971). There is a museum on the grounds where some of the oldest artifacts connected with the history of the monastery are on display.

A favorite gathering place for pilgrims and visitors is the monastery’s courtyard, with its impressive trees, such as a Paradise apple tree and a Chinese fir. The monastery is still functioning, and the monks offer overnight accommodations. The church’s annual holiday is on August 15.

Visitors can purchase informative materials, books, souvenirs, and icons on the premises. The path leading to the monastery is lined with small shops and stands that sell ceramic items, wood carvings, and other souvenirs.