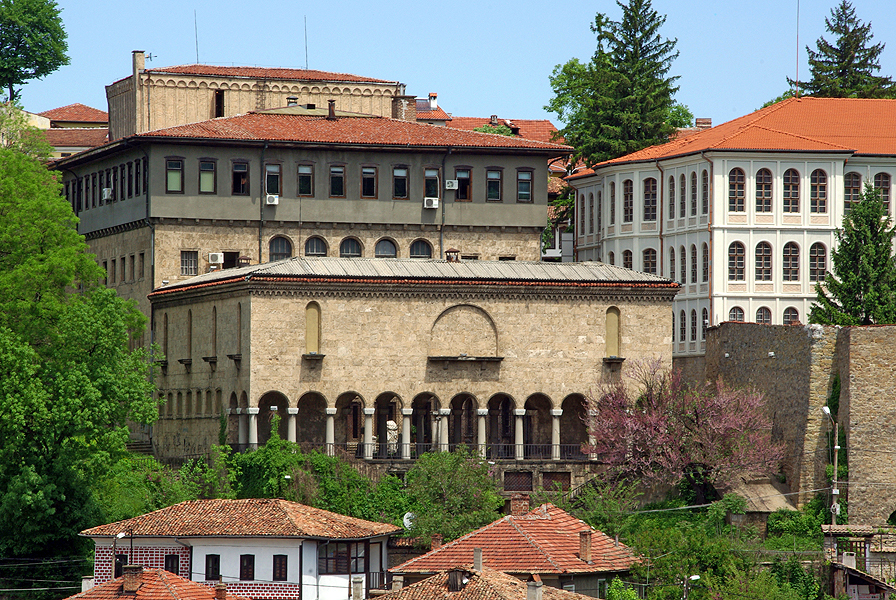 The Archaeological Museum of Veliko Tarnovo presents the Tarnovgrad – Capital of Bulgaria in the 12th – 14thCenturies Exhibition. The archaeological monuments which are part of it demonstrate the millennial history and culture of the Veliko Tarnovo Region. Special attention is devoted to the period when the town was capital of the medieval Bulgarian state.

The first museum hall follows the development of the life of the people who settled in the region in ancient times. Exhibits such as pottery vessels, tools, weapons, religious sculptures, etc., attract the visitors’ attention. They were discovered in the town tumulus at Samovodene Village, in the settlement in Kachitsa Area, in Veliko Tarnovo, in Dzhulyunitsa, in the town tumulus at Hotnitsa Village, in the settlement near Hotnitsa Waterfall, and in the Thracian settlement on Tsarevets Hill. The oldest exhibits date back to 5800 BC.

The exhibition in the second hall reveals the history of the urban, military and administrative, and economic centres that emerged during Antiquity and their place in the cultural and historical heritage of Bulgaria. The big urban centre Nicopolis ad Istrum, the Nove Roman military camp near Svishtov, the centres for the production of pottery art, pottery vessels, and building ceramics at Pavlikeni, Butovo, Hotnitsa, Byala cherkva (White Church), the Peritensium and Discoduraterae emporiums, the early-Byzantine town situated on Tsarevets Hill and Momina krepost Hill (Maiden’s Fortress Hill) are all represented in the exhibition. Most impressive are the collection of pottery vessels and casts from the 2nd – 4th centuries BC, the votive tablets depicting ancient Greek, Thracian, and Roman deities, the bronze sculptures, the engraved gems and cameos made of precious and semi-precious stones, the adornments, etc.

Exhibits demonstrating the culture of the time when Tarnovgrad was capital of the medieval Bulgarian state (12th – 14thcenturies) can be found in the third hall. Visitors can see gold and lead seals affixed to royal letters and correspondence, gold seal-rings of Bulgarian dignitaries, coins depicting Bulgarian rulers, adornments, arms, architectural elements and building ceramics, items made by craftsmen, a collection of pottery vessels, items of Eastern and Western European origin that ended up in the capital town thanks to its trade connections, literary monuments, examples of the Tarnovo Artistic School, etc.