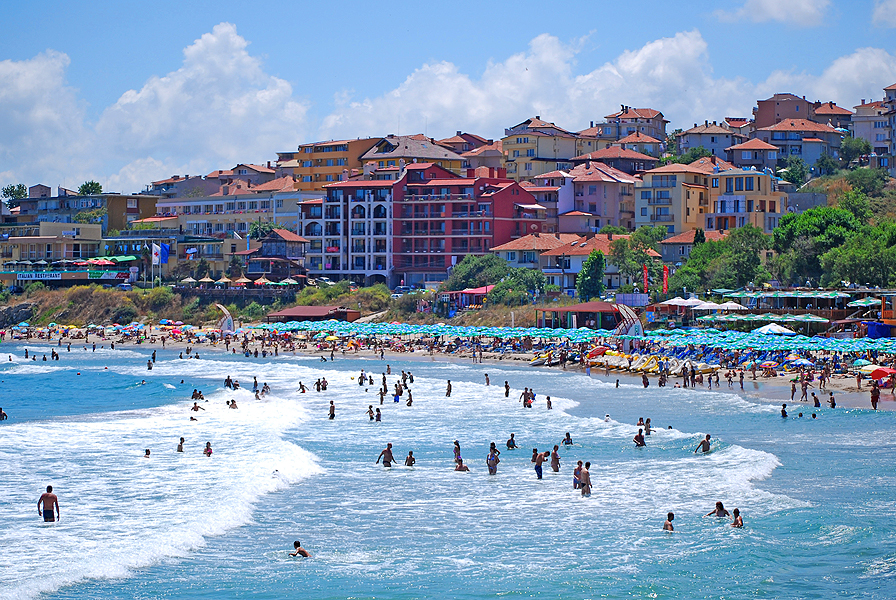 The city of Sozopol is located on a scenic bay along the southern Bulgarian coast, about 35 km south of Burgas.

The city, which has a population of 5,000, is one of the oldest on the Bulgarian Black Sea Coast and one of the country’s most popular seaside resorts. The romantic atmosphere of the city’s beautiful old town attracts visitors from all over the world.

Archeological research indicates that the city has a cultural tradition that is some 7,000 years old. The first settlement grew up on the Sozopol bay during the Neolithic Era, some 6,000 years BCE. In 610 BCE, the inhabitants of Milet, a city in Asia Minor, made the Sozopol peninsula their city-state and called it Apolloniya. The city-state enjoyed rapid growth during the first centuries of its existence. In the 5th century BCE, massive fortress walls were constructed to protect its monumental public buildings. Ancient writers describe The Temple of Apollo the Healer as colossal, housing a 13-meter high statue of the god. In 72 BCE, Apollonia was conquered by Roman legions commanded by Marcus Lucullus, who razed and plundered the city. The legendary statue of Apollo was removed to Rome as spoils of war.

During the 1st century, the city was rebuilt, and when Thrace became a Roman province Sozopol continued to function as an administrative maritime center. When Christianity was accepted as the official sate religion, Apolloniya was rechristened Sozopolis, in keeping with the new Christian dogma.

In the 5th century, the city was again fortified by new protective walls, remnants of which remain to the present day and can be seen at the southeastern end of the peninsula. The city was first incorporated into Bulgaria when the army of Han Krum occupied it in 812. Sozopol became an important diocese, with more than 20 Orthodox churches and 5 monasteries. Remains of the Saint Ivan (Saint John) monastery complex dating from the X-XII century are still preserved, as are the Medieval basilica in the city center and part of the Holy Apostles Monastery on Skamniy (Rocky) Point in the northeastern part of the Old Town.

Sozopol’s Old Town was declared a museum-reserve by Ministerial Decree № 320 on September 7, 1974. The reserve includes more than 180 residences, constructed from the middle of the 18th century to the beginning of the 19th century. Houses in the Old Town are built of stone and wood and conform to the so-called Black Sea school of architecture. The best known are The Marieta Stefanova House, The Kreanoolu House, The Todor Zagorov House, The Kurtidi House, and The Dimitri Laskaridis House, among others.

Two of Sozopol’s most attractive tourist destinations are the city’s archeological museum and art gallery. In 2010, during archeological excavations of the nearby Saint Ivan (Saint John’s) Island, researchers unearthed holy relics of Saint John the Baptist. Today these invaluable relics are in the care of authorities at The Saint George Church and attract pilgrims from all over the world. Old Sozopol and the relics of Saint John the Baptist were voted the most important of “Bulgaria’s Wonders” in 2011.

The biggest events in Sozopol aare The Apollonia Festival (September 1-10) and the July Celebration (June 30-July 1).

Sozopol has two beaches – the central beach and the Harmani Beach, and two other beaches in the immediate vicinity – The Golden Fish Campground and Kavatsi Beach.

The city is divided into the Old Town and the modern section. The Old Town is justly renowned for its romantic atmosphere, thanks to its narrow cobbled streets and venerable old houses. Sozopol’s modern section is filled with hotels, dining establishments, and other pleasant diversions. There are many kinds of accommodation available, from luxury hotels to small family hotels, from guest houses to bungalows. There are also quite a few campgrounds close at hand: The Gradina (Garden), The Zlatna Ribka (Golden Fish), Kavatsi, Veselie (Good Times), and Smokinya (Fig Tree). Sozopol’s restaurants offer typical Bulgarian Black Sea fare, along with a variety of specialties.

Many sports activities are possible at the city’s beaches, including jet skiing, surfing, beach volleyball, boating, and fishing.

The Ropotamo Nature Reserve is a short distance south of Sozopol, on the river of the same name. There visitors may take riverboat trips to view the region’s rich assortment of birds and plant life.