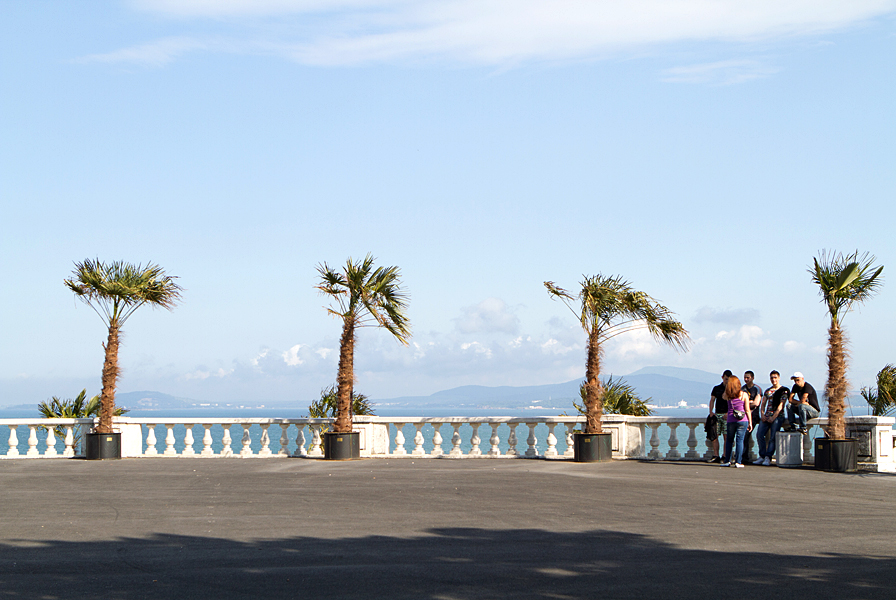 Burgas is one of the largest cities in the country. It is situated on the Black Sea shore, in the Burgas Bay, at a distance of 400 km from Sofia and 130 km from Varna. Burgas is an administrative center of the area with the same name. The city population is more than 230,000 people.

The Burgas port is the largest cargo port in the country. The airport which serves international flights is situated at a distance of 10 km north-east from the city.

The Burgas climate, highly influenced by the sea, is temperate continental, with average summer temperatures of 26.4 С, and the average sea water temperature during the summer is 24.7 С.

The closeness to the sea and the flat nature of the region is the reason for its settlement from antiquity to the present day. The earliest finds in the region are dated back to the Bronze and the Early Iron Age. There are multiple archaeological finds from the Thracian period (4th century BC). Some of the greatest battles between the Bulgarian state and the Byzantine Empire had been conducted in Burgas region. The victories of Khan Tervel (8th century) at the Anhialo field in708 and that of Khan Kardam (ruling 777 – 802) by the Karnobat fortress of Markeli in 792 strengthened the positions of the Bulgarian state.

During the Ottoman dominion the city developed as educational and cultural center. In the 18th century the Burgas port had already turned into the largest port south from the Balkan Mountain. Burgas was liberated from the Ottoman dominion on 6 February 1878. The city was subjected to intensive industrialization and modernization in the beginning of the 20th century.

Tourists can learn more about the city and other interesting facts in the expositions of the Regional Historical Museum of Burgas, which are situated in a few buildings. Pictures and documents related to the most contemporary history of Burgas – after 1878 to the 1970s are presented in the historical exposition. Archaeological finds from Antiquity and the Middle Ages are presented in the Archaeological Exposition on 21 Aleko Bogoridi Str. The history of ship building on the Black Sea since the middle of the 2nd century BC is presented by a special collection of articles. Here visitors can learn more about the history of Burgas during the first and the second Bulgarian Kingdom and the falling of the town under Ottoman dominion.

The cathedral church “St. Cyril and St. Methodius” is also one of the most often visited sites in the city. The temple was constructed during the period 1897 – 1907 according to the plans of the Italian architect Rikardo Toskani (1857 – 1929).The brother Cyril and Methodius are depicted at the main entrance wall-painting. The church was declared an architectural and constructional monument of culture of national significance by Issue 18 of the State Gazette of 1979.

The ethnographic exposition presenting the culture and the style of life of Burgas in the past is situated next to the cathedral church “St. Cyril and St. Methodius”. The richest collection of traditional costumes of all ethnographic groups in Burgas region is located in the museum. Unique ritual costumes from the 19th century, typical for the Burgas region, are also presented here. Here visitors can learn more about traditional Bulgarian rituals, such as singing Christmas carols, St. Lazar’s day dances, fire-dancing, etc. The “Troykata” square is situated near the temple. This is also a pleasant place for a walk.

The bird diversity in the Burgas lakes and the present condition of the flora and fauna on the South Black Sea shore is presented in the Natural Science Exposition.

In the Museum House of Petya Dubarova the visitors can get near the life and the works of the young poetess in Bulgaria. Petya Dubarova was born on 25 April 1962 in Burgas, and despite the fact that she put an end to her life when she was 17, she remained in the history of Bulgarian literature by her incredible poetic talent. Her native house was turned into museum, which was opened for visitors on 7 August 1995. A restoration of the room of the young poetess was made in the museum. Her school uniform, her notebook, as well as rich collection of pictures are presented in the museum. The museum also plays the role of a cultural institute. Since 1984 a contest had been conducted named after the poetess. Young artists in all genres can participate in it. Since 2003 a summer workshop has been conducted. The participant who had performed best at the summer contest are participating in it, as well as lecturers, invited for the purpose. The museum is a host of multiple exhibitions, literature readings, book presentations, etc.

Burgas is the cultural center of the region, which is evident by the active work of the Burgas Opera, Dramatic Theater “Adriana Budevska”, and the State Puppet Theater of Burgas. There are also multiple galleries in the city. Many cultural events are also conducted in the renovated Marine Casino. The Marine Park is a suitable place for a walk and relaxation. The summer theater of the city is also situated here. Diverse concerts and performances are conducted in it.

The Burgas forebridge is one of the favorite places for walk of the residents and the visitors of the city. It was constructed in 1936 and is situated near the Casino.

A bicycle park with three levels of difficulty is constructed in the Ezero Park (Lake Park) (at the entrance of the Marine Park). A special route is constructed for the so called “dirt jumping” for the adrenaline seekers. This is a discipline in cycling, in which artificially made jumping areas must be passed, and multiple attractive figures are performed in the air.

During the summer season Burgas turns into a festival center. The Sand Figures Festival has been conducted for a few years. Sculptures from the whole world participate in the making of sand figures, for which tones of sand are used. The figures are related to the festival theme, which is different every year.

Spirit of Burgas is undoubtedly the festival which brought international fame to Burgas and Bulgaria. The festival has been conducted since 2008 in August and gathers world famous musicians in various styles on a number of scenes.

The city is a host of multiple literature, musical and folklore festivals, as their culmination is traditionally during the summer season.

As a large economic, cultural and tourist center, Burgas can offer diverse accommodation options – luxurious hotels, cozy small family hotels, rooms, guest houses, etc. The night life, especially in the summer season, also offers a lot of opportunities – discotheques, bars, casinos. Besides the ones on the central streets of Burgas, catering establishments and bars are also located along the sea shore and the Marine Park. Other marine towns such as Chernomorets, Pomorie, Nesebar and Sozopol, as well as multiple camping sites are situated near Burgas.

You can find more information about landmarks of the city and the accommodation options from the Tourist Information Center.