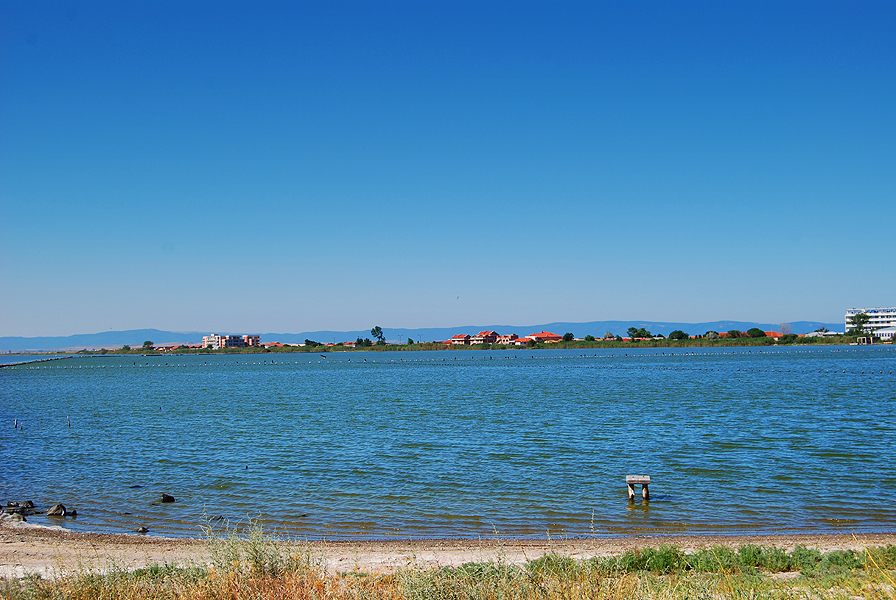 Pomorie Lake lies 25 km away from Burgas and 2 km north of Pomorie. It is an ultrasaline natural lagoon which is also the northernmost lake of the Burgas Lake Group.

It is separated from the sea by a sandspit and an artificial dike. The spit is made of “black” sand. This colour is due to the ferrous oxides found in it.

The lake has an elongated shape and is 6.7 km long and 2 km wide. There is a channel in its southern end which connects it with the Black Sea.

The weather conditions there are extremely favourable – long periods of sunshine of up to 2360 hours every year and an average temperature of 23.6°С for the month of July.

The bottom of the lake is covered with black mud rich in minerals and trace elements. The medicinal qualities of the liman mud that has been used since ancient times are precisely the reason why Pomorie is one of the preferred balneological, SPA, and wellness resorts on the Bulgarian Black Sea Coast. Today the medicinal mud is used for treatment of skin diseases and musculoskeletal disorders. It also finds applications in cosmetics and beauty procedures.

The northern part of the lake is used for the production of salt – an activity going on for more than 20 centuries in the area. The high salt content has created a unique environment to which various animal and plant species have managed to adapt, for example the brine shrimp (Artemia) and the glasswort plant (Salicornia europaea).

The total of 71 types of algae and 87 higher plant species such as the shiny bugseed (Corispermum nitidum) are found in the waters of Lake Pomorie. The sand dunes and the plants growing on them – purple spurge (Euphorbia peplis), sea holly (Eringium maritimum), European beachgrass (Ammophila arenaria), hemp (Trachomitum venetum), etc. – are typical of the spit that divides the lake from the sea.

The shores of the lake are overgrown with a narrow belt of reed. Bulrush can be seen in some spots as well.

There are 200 invertebrate species in total and the damselfly (Lestes macrostigma) is among the most popular ones.

Not many fish species live there. The Caucasian dwarf goby (Knipowitschia caucasica) is the only permanent resident of the lake, while the flathead mullet (Mugil cephalus), the leaping mullet (Liza salien), etc., are migratory types.

Via Pontica, the second largest avian migratory route in Europe passes above Pomorie Lake. This is the reason for the great diversity of birds in the region of the lake – a total of 269 bird species (nesting, wintering, migratory, etc.).

Mammals are represented by 31 species, including the smallest mammal in the world – the Etruscan shrew (Suncus etruscus).

Pomorie Lake and its adjoining territories that spread out on an area of 760 hectares were declared a Protected Area under the Bulgarian legislation (2001) with the aim of preserving the rare and endangered species and their habitats.

In 2002 the region of the lake was declared a Ramsar wetland under the Ramsar Convention for the Protection of Wetlands and Water Birds.

Tourists can get more information about the lake at the Visitor and Conservation Centre of Pomorie Lake. An exhibition of facts and photographs of the saline lagoon is also displayed there. Live shots of a colony of sandwich terns at the lake are shown in the exhibition hall as well.
The second floor of the building offers a view of the protected areas, as telescopes and binoculars are provided there. Guides and lectures are also available.

There are two types of route in the area around the lake: an ornithological one for the bird fans and a botanical one for the lovers of plants. There tourists will also find information boards, a map of the lake and marked trails.

Various information boards can be seen along the routes. They provide information about the rare and endangered plant and bird species that inhabit the region around the lake.

The Museum of Salt – the only museum in Bulgaria and Eastern Europe specialised in the production of salt through solar evaporation of sea water, is located near the lake. The ancient Anchialic technology for the production of sea-salt is demonstrated at the museum. It consists of an exhibition hall and 20 decares of functioning salt-mines. It houses a unique collection of photographs from the beginning of the previous century which follows the development of salt production in the region, old topographic maps, models and authentic salt-production equipment and tools. Up-to-date audio-visual devices provide visitors with the opportunity to see interesting films. Souvenirs, brochures, etc. are available at the museum.