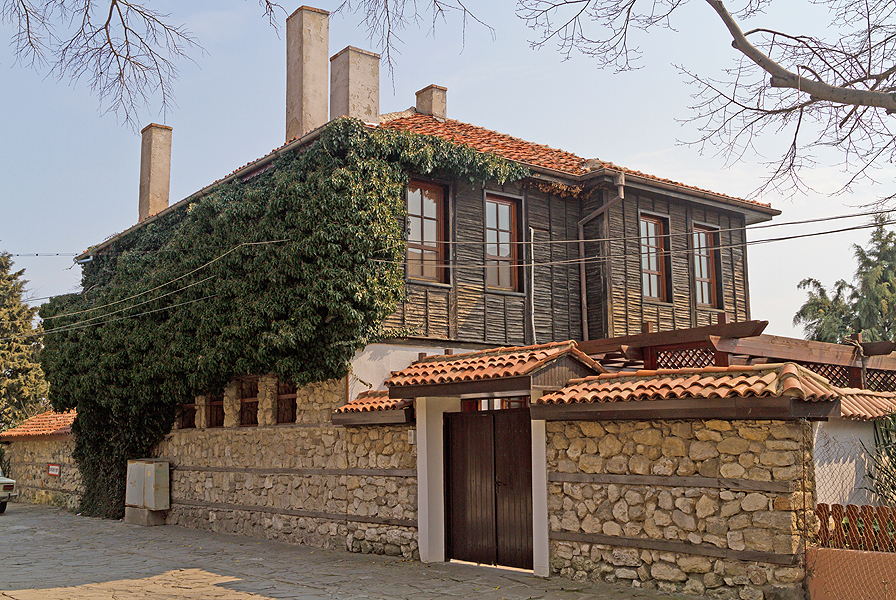 The reserve Old Pomorian Houses is situated close to the sea shore, in the east end of the old part of Pomorie and presents the architecture and the typical elements of the sea shore houses.

The buildings in the reserve were built in the 19th century. The typical Pomorian house, which the tourists can see while walking along the cobblestone streets, is two-storey high. It consists of a stone ground floor and a frame-built upper floor. The upper floor is covered in wooden casing made of pine planks and beech logs upon them, placed horizontally. The basic reason for their placing this way is the climate – the planks do not stop entering of moisture to the building.

The high ground floor is built of stone. Kitchen and farm premises, as well as warehouses were housed inside it. The premise doors are wide, so that a car loaded with goods can go in and out, because the ground floor was used as a wine warehouse and for drying of fish and fishing nets.

A wooden staircase leads to the saloon on the second floor. Rooms and saloon niches are arranged around the saloon. Every premise had strictly determined functions. In the rich Pomorian houses the saloons and the rooms had artistic decoration on the ceilings and the walls.

The houses in the reserve are private and are not accessible for visits, but there is an exposition in the Historical Museum of Pomorie which recreates the exact arrangement of the Anhialo home. There visitors can learn more about the style of life of the local people in the past.