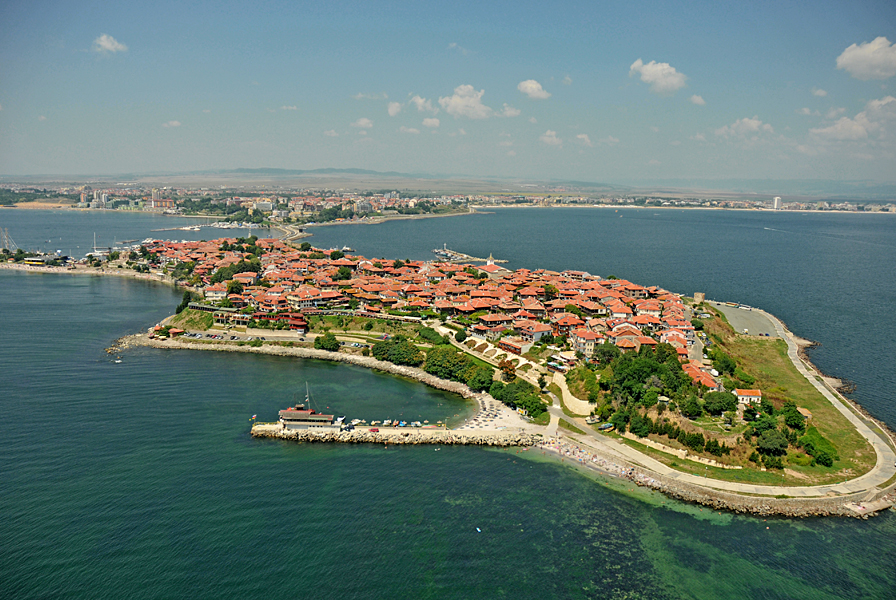 The town of Nesebar (with a population of 10 000 people) is situated on the Black Sea Shore, 36 km northeast of Burgas. It is in close proximity to another big Bulgarian resort – Slanchev bryag (Sunny Beach).

The town was established more than 3200 years ago. Thracians settled there at the end of the Bronze Age. They called it Mesambria, which meant the town of Melsas – that was probably the name of the founder of the settlement.

They were succeeded by the Dorians (ancient Greek tribe) who came to the town at the end of the 6th century BC. Under their control the settlement expanded: a fortification wall was built, residential quarters emerged, etc. At the beginning of the 1st century AD the town became part of the Roman Empire. It was then when they started calling it Mesembria.

The town continued to be an important economic and cultural centre. After the capital of the Roman Empire moved to Constantinople and Christianity became the official religion, there was a building boom of Christian temples on the territory of Mesembria. The town became part of the First Bulgarian Kingdom in 812 when Bulgarian ruler Khan Krum conquered it. The Slavs who settled there started calling it Nesebar. The town played a crucial role during the reigns of Tsars Kaloyan (1197-1207), Ivan Asen II (1218 – 1241), and Konstantine Tikh (1257-1277).

The town flourished under the rule of Tsar Ivan Alexander (1331 – 1371) – many new churches were built, culture and religion developed.

Nesebar was conquered by the Ottomans in 1453.

Today the old and the new part of the town are connected by a narrow isthmus. The old town lies on a small peninsula. Because of its exceptional cultural and historical value Nesebar was declared a museum, tourist, and resort complex of international importance by virtue of Ordinance No 243 of the Council of Ministers of 18 July 1956. In 1983 Old Nesebar was included in the List of World Cultural Heritage Sites of UNESCO.

Tourists can get more information about the history and the development of the town at the Archaeological Museum which is located at the very beginning of the peninsula. It exhibits finds discovered during archaeological excavations. The traces of past historical periods are everywhere. Part of the fortification wall can be seen in the Old Town. It was declared an architectural-construction monument of culture of national importance by virtue of publication in State Gazette, issue No 41 of 1964. A number of churches have been preserved and two of them – St. Spas Church and S. Stefan Church, have been transformed into museums.

Many of the houses in the Old Town were built during the Bulgarian Revival Period (18th – 19th centuries). The architectural design of Moskoyani House, where the exhibition of the Ethnographic Museum of Nesebar is housed, is interesting. Visitors can learn many things about the life and the culture of the people of Nesebar. Various everyday objects and traditional costumes are displayed there.

Various events and concerts are held at the ancient theatre in Old Nesebar in the summer. Behind it lies the Nesebar Port where during the active summer season one can often see cruise ships which have stopped by the UNESCO town. Visitors who want to capture the spirit of the town can stay in Old Nesebar – there are many accommodation opportunities that vary in type and price – family hotels, private rental rooms, etc. There are numerous restaurants in the vicinity that serve delicious sea food.

Apart from the fact that it functions as a connection between the old and the new parts of the town, the isthmus is also a preferred place for strolls of the guests and the citizens of Nesebar. There are pedestrian alleys on both sides of the isthmus, close to the sea. The wind-mill that stands in the middle of the isthmus is another symbol of the town.

The new part of Nesebar also offers various accommodation opportunities. The buildings of the town administration and many institutions are situated there. The north and the south beaches of Nesebar lie in the new part of the town. There is a beach in Old Nesebar, but it is a small one. Those who seek more excitement and entertainment can have a helicopter tour over Nesebar. In addition to that boat rides and various opportunities for water sports are available at the beaches of the resort. The numerous restaurants in the town vary in category and price. The romantic souls would prefer the restaurants in the Old Town, while young people would have more fun in the new part of Nesebar and the nearby resort of Slanchev bryag (Sunny Beach).

In the summer the two resorts are connected by bus services which also operate to and from other destinations in the region. St. Vlas Resort, Elenite Resort, and Ravda Resort are not far away from Nesebar.

The Day of Nesebar is celebrated on 15 August. Many events are held then – exhibitions, concerts on several stages, a religious procession (15 August is the Day of the Assumption of Mary).