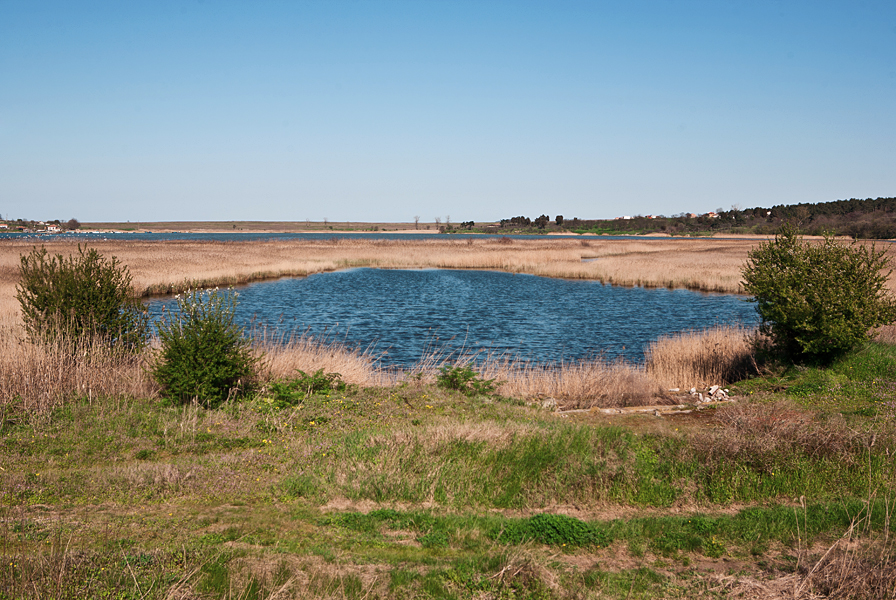 The Poda Nature Preserve is four kilometers south of Burgas, on the left side of the international highway from Burgas to Istanbul. It was designated as a preserve in 1989, and declared a protected area for the breeding and protection of birds by the Bulgarian Association for Bird Preservation (BDZP). It is the first NGO preserve in Bulgaria dedicated to the protection of wildlife. Also in 1989, the preserve was recognized by BirdLife International as an important ornithological reserve, and in 1987 the Poda Nature Cener was constructed within the boundaries of the preserve. The following year, Poda was recognized as a key European site because of its central role in protecting rare and endangered bird species. In 2003, Poda was further recognized as an internationally important wetlands area, in agreement with the Ramsar Convention, and was also included in the UN HABITAT Program for its exemplary conservation practices.

The preserve’s square kilometer of protected area is one of the richest ornithological areas in Europe, providing a habitat for 265 bird species. These include the the only mixed colony of European Spoonbills (Platalea leucorodia) on the Black Sea coast; the Glossy Ibis (Plegadis falcinellus); and Nocturnal, Red, Gray, Ringed, and Lesser Herons (Ardea).

There are 46 species of nesting birds, the most attractive of which are the Common Tern (Sterna hirundo); the greater cormorant (Phalacrocorax carbo); various kinds of diving ducks (Aythya); other species of waterfowl (Anatidae); and the Western Marsh-harrier (Circus aeruginosus).

During the winter months, the area from Bourgas’ Foros Bay to the Poda Reserve is visited by a variety of migratory species: the Pygmy Cormorant (Phalacrocorax pygmeus), the Dalmatian Pelican (Pelecanus crispus), the Tundra Swan (Cygnus bewickii), and others.

The Via Pontica, Europe’s second largest flyway for migratory birds, passes directly over the Poda Preserve, and every year brings populations of White Storks (Ciconia ciconia), Great White Pelicans (Pelecanus onocrotalus), and thousands of other birds – predators, swimmers, and waders.

The Poda Preservation Center undertakes year-round research on migratory birds, but the best time to observe them is during the months of March, April, August, and September.

Besides birds, the preserve is home to the Blotched Snake (Elaphe sauromates), the largest snake in Bulgaria, as well as the Etruscan shrew (Suncus etruscus); Europe’s smallest mammal; the exotic coypu or nutria (Myocastor coypus); and the European otter (Lutra lutra).

The Poda Nature Preserve is open to visitors year-round. There are a few general itineraries that allow birdwatchers to observe both the migratory and established species without disturbing them. There is also a covered enclosure, so that visitors can observe the birds regardless of the weather.

Visitors to the bird sanctuary are advised to make advance arrangements.

The Poda Nature Center is also open year-round, and houses permanent displays dedicated to the preserve’s and the region’s biodiversity. The center has special viewing equipment, such as high-quality binoculars and spyglasses (hand-held telescopes), and professional ornithologists are available to lecture on various topics related to the work of the preserve. Lectures are in Bulgarian, English, German, and Russian. There is a two-story terrace to view the preserve’s many bird species, free informative brochures in six languages, and open-air interactive displays – “a bird clock”; the road to understanding”; “a box of pleasant aromas”; “a display of nesting birds”; “a refreshment stand”; and others. There is also an eco-trail in the Poda Preserve with bird-watching shelters, a well-stocked ornithological library, and an exhibition hall that mounts temporary displays on topics related to the center’s activities.