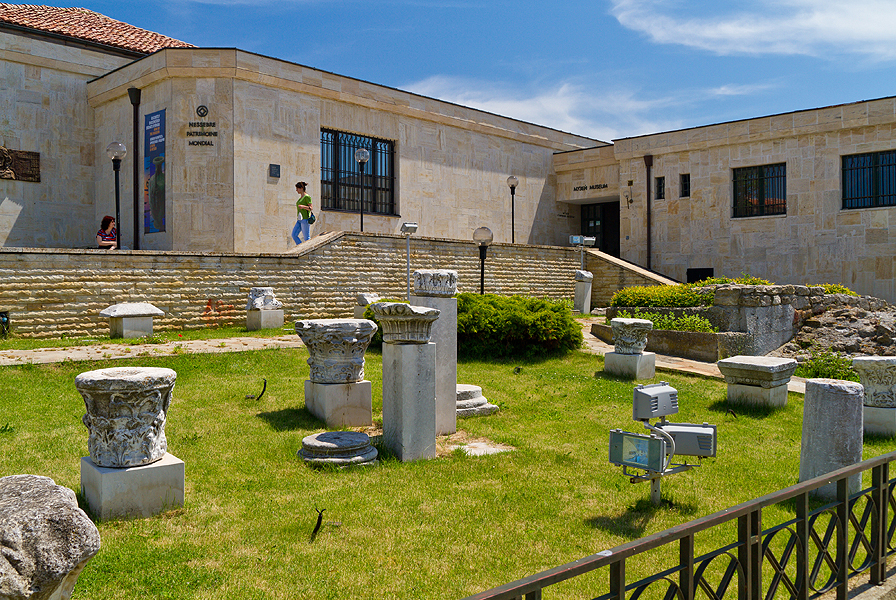 The Museum in Nesebar is one of the most visited attractions in the town. It preserves the millennial history of the town and presents it to tourists in a modern and attractive way.

The first exhibition of the archaeological museum was set up in 1956 in the Church of St. John the Baptist in Old Nesebar. Since 1994 the museum has been housed in the building where it is now.

The tour around the museum starts from the lobby where the certificate for the inclusion of Old Nesebar in the List of World Cultural Heritage Sites of UNESCO on 9 December 1983 is displayed.

The museum has four exhibition halls chronologically following the development of the town through the different historical periods.

The first hall is called Mesembria and the Thracians. The visitors can see remains of items from the everyday life of ancient Thracians, such as pottery vessels embossed with ornaments from the 9th – 6th centuries BC, finds of stone anchors dating back to the 12th – 11th centuries BC, etc. A 3rd century BC decree is also shown in this hall. It is in honour of Thracian dynast Sadalas. A silver coin treasure consisting of tetradrachmas and a 2nd century AD tombstone can also be found among the exhibits in this hall.

The second hall of the museum called Mesembria – the Pontic Polis displays four extremely rare hydriai (bronze vessels) discovered in the necropolis of Mesembria. They were used as funeral urns and depicted scenes from the Greek mythology below their vertical handles. Visitors will also be able to see part of a statue of god Apollo, the torso of a statue of Heracles, a statue of Tyche, goddess of good fortune, that date back to the 4th century BC, etc. Other exhibits include gold adornments, such as earrings, rings, and necklaces from the 3rd and the 2nd centuries BC. They were discovered among the funeral gifts in the tombs. Foreign ceramics, such as relief bowls, kylixes, askoi, etc., providing evidence of the good trade relations Mesembria had in the 6th – 2nd centuries BC were discovered in the water area around Old Nesebar and on the peninsula itself.

The marble pedestal of the bronze statue of Emperor Claudius is displayed in the third exhibition hall of the museum. The hall is called Mesembria on the territory of Rome, Byzantium and Bulgaria. In 395 when the Roman Empire split, Mesembria remained in its eastern part to become an influential economic and cultural centre. During the 7th century the town was an important Byzantine stronghold against the new Bulgarian state. The town was conquered in 812 by Bulgarian ruler Khan Krum and was annexed to the territory of the First Bulgarian Kingdom. The grey-clay pottery vessels exhibited in the museum are from this period. There is also a collection of amphorae and white-clay glazed vessels that provides information about the trade relations Nesebar had with Constantinople and other trade centres in the 9th – 12th centuries. Nesebar had its heyday during the reign of Bulgarian Tsars Ivan Asen II (1218 – 1241) and Theodore Svetoslav (1300 – 1322), and especially under Tsar Ivan Alexander (1331 – 1371). The medieval churches are the most solid evidence of the progress of Nesebar in the 13th – 14th centuries. In this hall visitors will find the tombstone of Byzantine Princess Mataisa Kantakouzene Palaiologina who died in 1441.

There is a special hall in the Archaeological Museum of Nesebar dedicated to iconic art. After Bulgaria was conquered by the Ottomans (14th century) a local icon-painting school was founded in Nesebar. Its zenith was in the 16th – 17thcenturies. Around 250 icons pained by local icon-painters that used to hang in the scores of churches in the town have survived to this day. The oldest examples of the work of the Nesebar School date back to the 13th century. The icons of St. Nicholas and the Virgin Mary – Ruler of Life are from this period.

Books, specialised literature, guidebooks, cards of all museum sites in town, and souvenirs are sold at the museum.