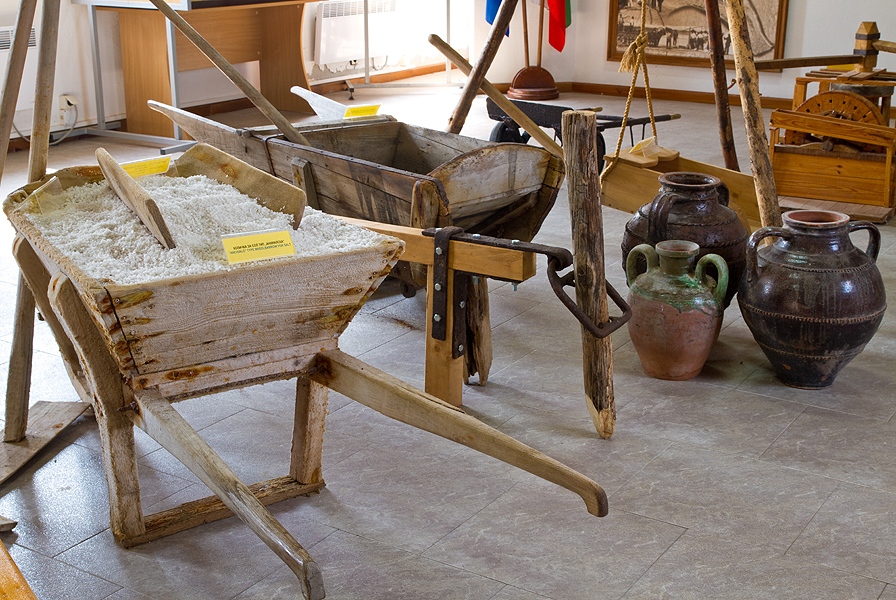 The only salt museum not only in Bulgaria but for the whole Eastern Europe is located in the town of Pomorie, 20 kmaway from Burgas. It opened its doors on 7 September 2002. It is dedicated to the production of salt through solar evaporation of seawater. The museum showcases the ancient Alchialos method for salt production.

The production of salt in the region of Pomorie provided a livelihood for the local people for centuries. According tohistoric sources the salt-pans in the region of Pomorie existed even before the establishment of the town (about the 5thcentury BC). In ancient times salt was extremely valuable – rare and expensive – and for this reason it was sometimes called “white gold”.

The Salt Museum in Pomorie is a specialized outdoor museum – visitors may see both the museum building and the 20 decares of salt-pans adjacent to the museum, where salt is still being produced.

The salt-pans are a number of basins separated from one another by wood and dirt embankments. Salt is produced thereutilizing the same technology that was used  сеnturies ago.

The museum exposition in the building represents the development of the ancient salt-production technology. Here you can see a rich collection of photographs from the beginning of the 20th century and copies of documents form the period 15th – 19th century, which depict the production and trade in salt in the Bulgarian lands. Some of the most interesting exhibits in the collection are authentic salt-working tools such was wooden salt-working barrows, rakes, etc.

In the museum building you can also watch films dedicated to salt production. Lake Pomorie, on which territory themuseum and the salt-pans are located, is a protected zone. There are over 200 birds species observed in the habitat of the lake and over it passes the bird migration route of  Via Pontica. There are some artificial small islands built in the lakewhere colonies of Common and Swandich Terns, Pied Avocets and other birds make their nests.

Special video cameras in the salt-pans monitor the behaviour of the birds and the visitors may watch the feathered tribeson screens inside the museum. Additional information materials and souvenirs are available at the museum.