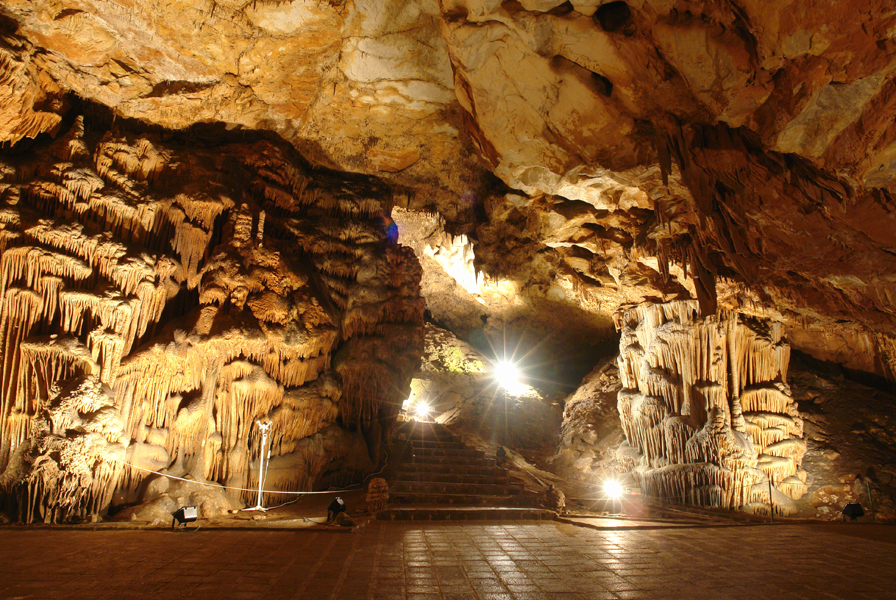 The Saeva Dupka Cave is one of nine developed caves in Bulgaria. It is located near the village of Brestnitsa in the Lovech region. The cave’s name comes from the names of two brothers, Sayu and Seyu, who hid in the cave during the time of Ottoman rule. The cave was declared a natural landmark by Decree № 2810 on October 10, 1962.

When the cave was being developed for tourists, workers found animal bones, earthenware pottery, and Roman coins.

The cave opened for visitors in 1967, but was closed in 1990. It reopened in 2004. Saeva Dupka consists of 5 galleries, the largest of which is The Srutishte (Demolished) Gallery. The gallery nearest the cave mouth is known as Kupena (Haysatck), since it resembles a haystack. Visitors then enter Srutishte, which looks like it has just been struck by a powerful earthquake, with stone blocks strewn on its floor. The galleries after that are called Harmana (Threshing Floor), Belya Zamak (White Palace), and Kosmos (Cosmos).

Saeva Dupka is exceptionally beautiful, displaying all forms found in caves: stalactites, stalagmites, karst lakes, rock curtains, and so forth. The cave’s lavishly decorated walls and ceiling give visitors the impression that they have entered a cathedral. The Harmana Gallery has such excellent acoustic properties that concerts are held here that often feature large choirs and famous performers. The cave has also been used a setting in films.

Many of the forms in the cave present recognizable shapes, and tour guides like to point them out and identify them by name. The cave tour takes less than an hour, but the other attractions in the area are sufficient to take up an entire day, at least. In the cave’s immediate vicinity are the most impressive Via Ferrata and the Lednitsa Hanging Garden.

A Via Ferrata (Iron Road) is a trail equipped with iron cables on stairs, bridges, and parapets, allowing visitors to the Alps and other mountain ranges not trained as climbers to traverse precipitous terrain. While this Via Ferrata is far from technical climbing, visitors still use climbing gear here to scale the sheer cliffs.The Lednitsa Via Ferrata is the only route of its kind in Bulgaria, and offers equipment for both novices and more advanced climbers. Such extreme sport is exhilarating, though it can also verge on the downright dangerous. There are a number of routes of varying difficulty ascending the 100-meter Lednitsa face. While making the ascent, climbers depend entirely on their strength, courage, and of course the climbing equipment that is for hire on the spot.

For youngsters, though not only for them, a rope garden (a system of connected ropes and rope ladders) has been constructed high in the trees, presenting obstacles of different degrees of difficulty. It is a vertiginous maze requiring considerable strength, agility, and courage that is also unforgettable fun, particularly for larger groups.

Visitors seeking tranquility rather than high-powered adventure may choose from the many marked hiking trails in the region.