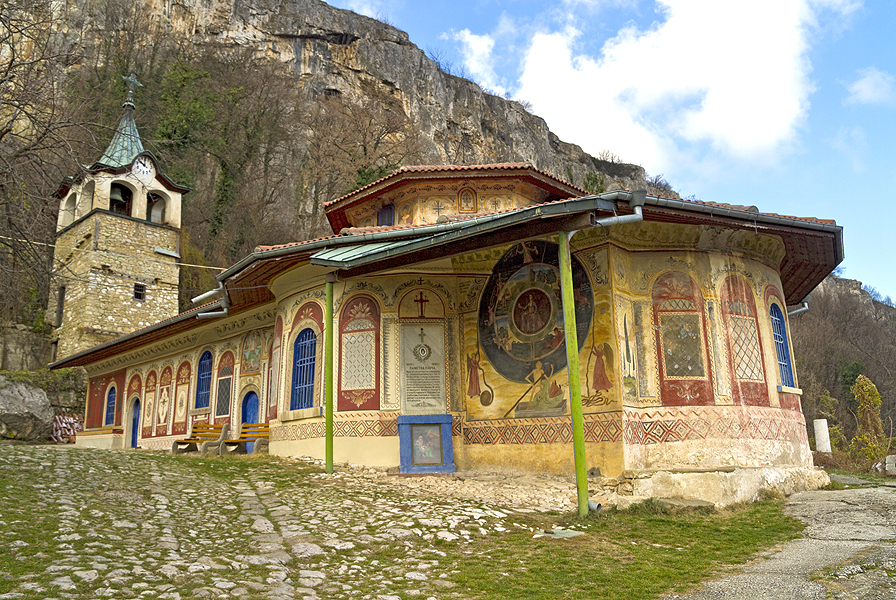 The Transfiguration Monastery is located 7 km away from Veliko Tarnovo, below the inaccessible vertical rocks over the left bank of the Yantra River, near Samovodene Village. It lies below the caves of Biskalski venets (Biskalski Wreath) in Belyakovsko Plateau.

It is the biggest monastery in Veliko Tarnovo Region. It is believed it was founded during the Second Bulgarian Kingdom, around 1360, by Tsaritsa Sarah-Teodora and her son Ivan Shishman (14th century). That is why it is also referred to as Sarah’s or Shisman’s monastery. It played an important role in the religious life of the Bulgarian capital in the 14thcentury.

During the Middle Ages the monastery was situated approximately 400 – 500 m south of where it stands now. Research conducted in 1952 provided evidence thereto. Fragments of Tarnovo tableware ceramics and of wall-paintings in the style of the Tarnovo Artistic School were discovered.

The initial location of the monastery was abandoned after it was destroyed during the Ottoman conquest of Tarnovo at the end of the 14th century.

During Ottoman rule the monastery was burned down several times by kardzhalii (bandits who acted in groups on the territory of the Ottoman Empire) and after that it was abandoned and demolished.

In 1825 with the permission of Sultan Mahmud Han, Father Zotik, a well-known patriotic monk, took up the task of reconstructing the monastery in its present location.

The buildings of the monastery were built one by one and they form a rectangle with a yard paved with cobblestones.

The construction of the Transfiguration of God Main Church started in 1834 by master Dimitar Sofiyaliyata and was completed by master Kolyu Ficheto, one of the most famous master builders in the 19th century. In 1837 he completed the south wing with the little drawing-room and designed the main entrance and the column.

In the period 1849 – 1851 the great Bulgarian artist Zahariy Zograf of Samokov decorated the interior and the exterior with wall-paintings.

In 1861 Kolyu Ficheto constructed the belfry with the clock. Two years later he built the small Annunciation Church over St. Andrew Underground Chapel which was constructed in 1834 by Dimitar Sofiyaliyata.

During the Russo-Turkish War (1877 – 1878) the monastery was converted into a hospital. To express their gratitude, after the Liberation of Bulgaria (1878) the Russian soldiers offered the bells, the chandeliers, and some liturgical books as presents to the church.

Nowadays the Monastery of the Transfiguration of God is a functioning monastery and is open for visitors.

The patron saint’s day of the monastery is celebrated on 6 August.

Information materials and souvenirs are sold in the monastery. Accommodation is not available.