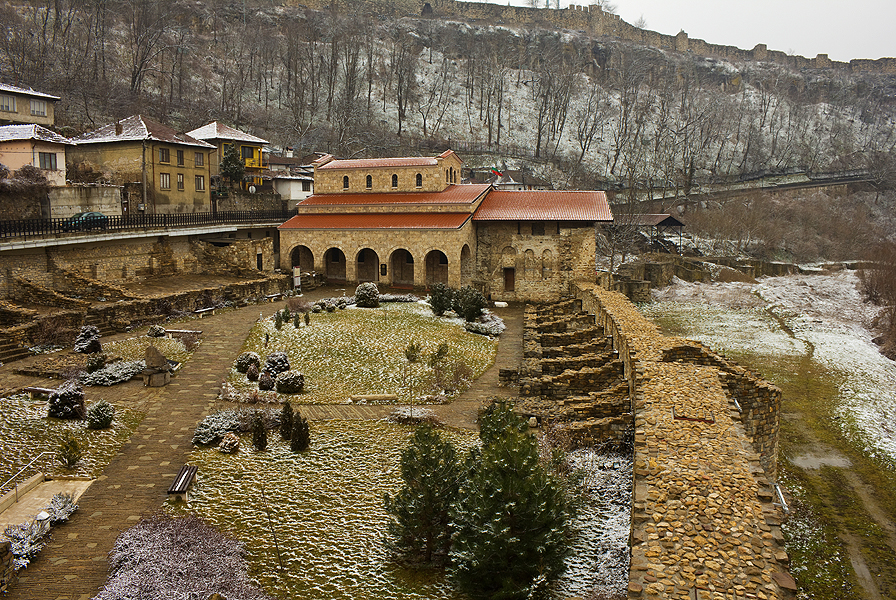 The Holy Forty Martyrs Temple is one of the most emblematic medieval churches in Veliko Tarnovo. It is located at the foot of Tsarevets Fortress. The temple has been a monument of culture since 1964 and is closely related to the history of Bulgaria. It was built and its walls were painted in honour of the victory of Tsar Ivan Asen II over Theodore Komnenos Doukas, ruler of Epirus, in the Battle of Klokotnitsa on March 22, 1230.

The church is composed of two parts: an oblong basilica with six columns and an annex added later to the western side of the building.

It is believed that the Asen Dynasty (a Bulgarian royal dynasty that ruled in the period 1187 – 1280) built a monastery surrounding the church at the end of the 12th century. It was referred to as the Great Lavra and the Royal Monastery in the historical sources from the 12th – 14th centuries and was one of the most important medieval monasteries in the Tarnovo Region.

The conquering of Tarnovo by the Ottomans led to the decline of the monastery. The social stratum (the Bulgarian aristocracy) that took care of the church and the monastery perished, and the Christians grew smaller in number. The church served the Christians living in the neighbourhood until the 14th century when it was transformed into a Muslim mosque. This was precisely what saved the temple, because all Christian temples on Tsarevets Hill and Trapezitsa Hill were destroyed during the Ottoman rule (1396 – 1878).

After the Liberation of Bulgaria in 1878 the temple converted back into a Christian church.

Of the wall-paintings that survived, the ones of St. Elizabeth with baby John the Baptist (above the entrance) and St. Anne are of interest to visitors.

The Orthodox temple also preserves some of the most significant ancient Bulgarian epigraphical monuments that give account of the great deeds of Bulgarian tsars such as Omurtag’s Column, Asen’s Column and the Border Column from Rodosto Fortress dating back to Khan Krum’s reign (803 – 814).

The church is a branch of the National Museum of History in Sofia. Today the Holy Forty Martyrs Temple functions as a museum and is open for visitors, as holy liturgies are served in it on the biggest Christian holidays.