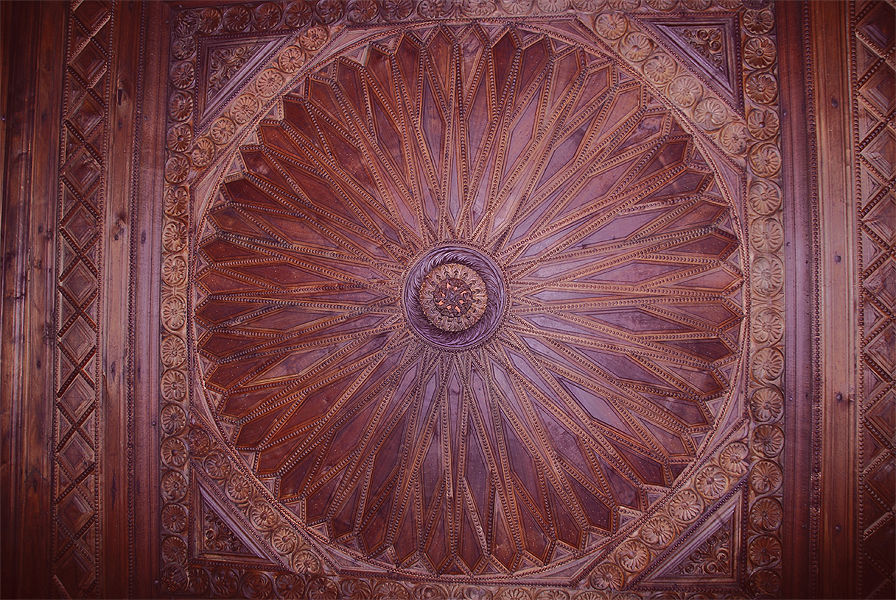 The Museum of Wood-Carving is housed in the building of the old Daskalov’s House in Tryavna. It is not by chance that the museum is located in Tryavna. This was the place where the Tryavna Artistic School, the oldest in Bulgaria, was set up. It originated at the end of the 17th and the beginning of the 18th centuries and developed in three directions: icon painting, wood-carving and construction. These were also the three main crafts the local masters took up.

One of these three branches is preserved in Daskalov’s House – the only museum in Bulgaria devoted to wood-carving.

In the period 1804 – 1808 Hristo Daskalov, a merchant from Travna, built Daskalov’s House for his two sons. It is a typical example of the richly decorated architecture from the first part of the Bulgarian Revival Period.

The two suns carved on the ceilings in two of the rooms of the house are among the most famous exhibits of the museum. They were made by master Dimitar Oshanetsa and his assistant Ivan Bochukovetsa, who made a bet in 1808 as to which one of them would decorate a ceiling with wood-carvings more beautifully.

The museum presents the three main types of wood-carving: the so-called shepherd’s carving, which is the simplest kind, the wood-carving used for home decoration, and the most exquisite, but also the hardest one to make: the church carving.

The shepherd’s carving is the simplest type – just shallow carved geometrical figures used mostly for the decoration of everyday objects, such as distaffs, little spoons, salt shakers, cigarette boxes, etc. One of the most interesting objects in the museum is the folding candlestick designed for trips.

Almost the entire interior of the typical Tryavna house was decorated: furniture, ceilings, doors, columns, iconostases, etc. According to tradition all houses had iconostases. The museum exhibits and keeps some of the best examples of iconostases made by Tryavna master wood-carvers.
A workshop is also set up in the museum where wood-carving techniques are demonstrated and wood-carving tools are displayed.

The collection of original works by master-carver Gencho Marangozov is also interesting. It comprises wood-carvings and sculptures of Bulgarian khans and tsars, and bas-reliefs of people from the Bulgarian Revival Period, made upon the request of Avram Chalyovski, a rich manufacturer from Sofia.

Apart from the art produced by the people of Tryavna, the museum also displays other interesting objects related to the history of the town. Additional information materials and souvenirs are sold at the museum.