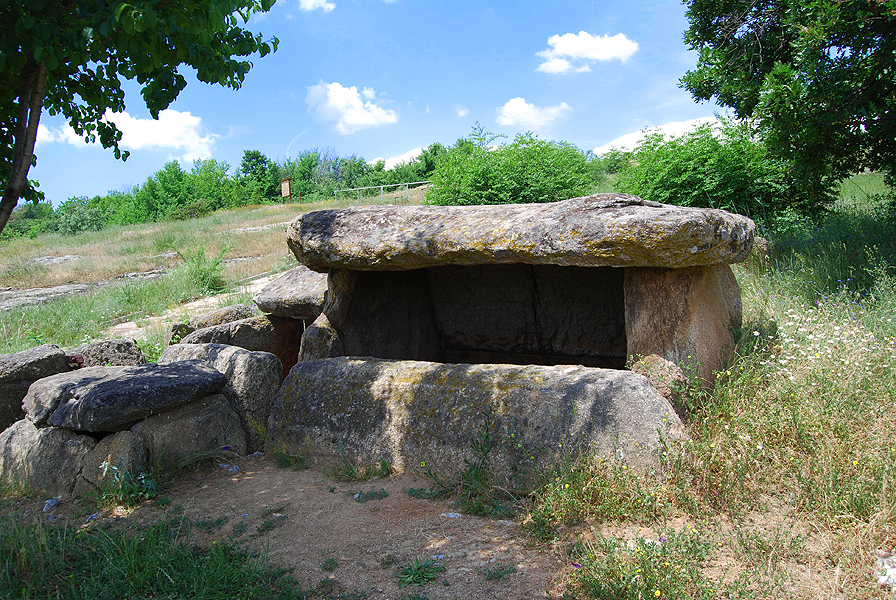 One of the most interesting monuments of antiquity – the Dolmens – is located in Byala Treva area, near the village of Hlyabovo.

The Dolmens (from Breton – dol – mass and men – stone), are the first representatives of the monumental tomb architecture on the Bulgarian lands. They are common for the territories of Haskovo area in the Strandzha and Sakar mountains and the eastern Rhodope mountain. They are the precursors of the later created unique Thracian tombs like the one near the village of Alexandrovo. The ancient Thracians laid the bodies of the dead in such tombs. These kind of tomb constructions were used by these lands in the period between the 12th and the 6th century BC.

By their nature, the dolmens are single or dual-chamber rooms of oblong shape, the walls of which were formed from natural or roughly shaped stone blocks, covered by other large stone blocks. The ancient Thracians used to make small mounds of soil and small stones on the dolmens after a funeral.

The Dolmen near the village of Hlyabovo is the largest one in Bulgaria. The ancient monument dates back to the early Iron Age (approximately 1050 – 500 year BC). It is believed that the dolmens used to be built for people with high social status, but no evidence for a specific person has been found yet. The dolmens near the village of Hlyabovo were declared a natural landmark by Order No 378 of 5 February 1964.

Similar monuments can be seen in many places in Bulgaria, but among the most typical representatives of the megalithic culture are those in Bayamlaka area near the villages of Oryahovo and Plevun, Haskovo area.