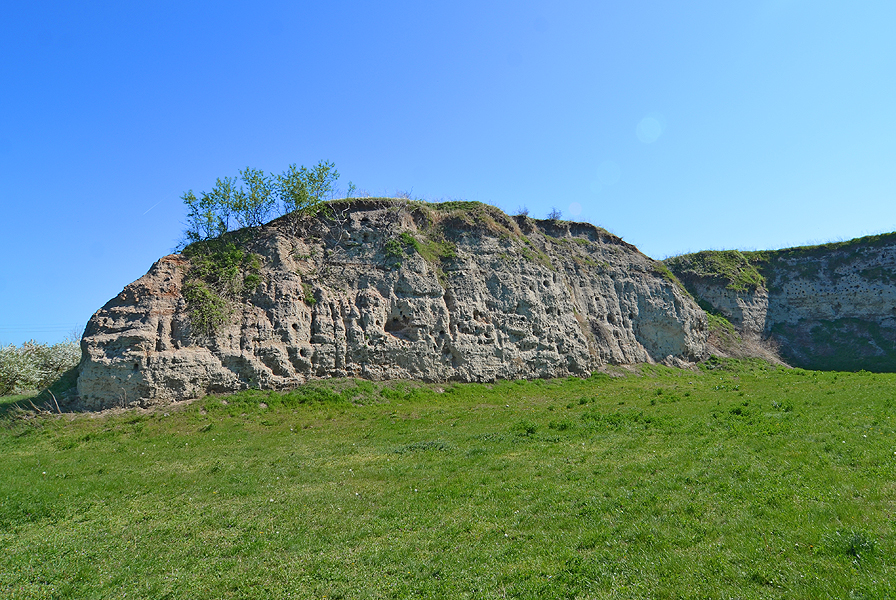 This Thracian Tomb is located at the edge of the Surnena Forest, in the northwest part of the village Karanova, roughly 10 km from the city of Nova Zagora. It occupies an area of 24 hectares. The tomb, which was discovered during excavations during the 1950s, is one of the oldest in Europe.

The burial mound site was also a settlement, of a type which abound in Bulgaria. The Karanova necropolis, one of Bulgaria’s largest, is 13 meters high, 250 meters long, and 150 meters wide. Though only part of the mound has been excavated so far (about 1,700 square meters), most of its archeological wealth has already been uncovered. The efforts of researchers studying this cultural treasure have yielded a stratigraphic profile of the prehistoric settlement (a scheme of the site’s strata), so that the each of the cultural periods represented can be placed in its chronological framework. Every prehistoric epoch is represented here – from the Neolithic through the Bronze Age. All finds from the mound are displayed at museums in Sofia and Nova Zagora.

The necropolis was inhabited for roughly 3,000 years.

Archeological excavation was undertaken here from 1936 to 1984, with international participation, and was jointly sponsored by The University of Salzburg in Austria. A round seal was found at the site that archeologists believe to be from the earliest phases of writing. The seal has a diameter of 6 cm and is 2 cm thick, and is engraved with ancient European symbols. It is conjectured that the seal was a sign of high status conferred on public servants and that it was used during religious ceremonies.

At 1.3 km northeast of the village are fortifications and an outer wall of the burial mound’s basilica, which contains 16 tombs (The Long Tomb, The Eastern Tomb,  and The Tax Collector’s Tomb, among others). Excavation at this part of the site continued from 1976 to 1998, though there have been lengthy interruptions.

In 2008, a team of archeologists began a study of The Eastern Tomb. It has an elliptical form with a diameter of 63-77 meters and is oriented lengthwise from north to south. The mound is 11 meters high at the northern end and 14 meters high at the southern end. In 2009, the team of archeologists found one of the most interesting and important objects at the entire site – a vaulted brick tomb and burial chamber (with dimensions of 3 by 4 meters). The person buried there was obviously very wealthy – two silver chalices were found, both inscribed with the image of the god Eros, along with unique glass plates, warrior’s accoutrements, coins, silver anklets, and gold rings. It is thought that the grave belonged to a Thracian nobleman who was buried there during the 1st century CE.

A four-wheel warrior’s chariot was also found, along with the remains of two horses and two dogs. The chariot wheels are exceptionally large, with a diameter of 1.20 meters. The chariot is composed of hide, wood, and bronze, and the bronze decorations on the body of the chariot are particularly noteworthy. Even more richly worked are the horses’ bits and harnesses. Visitors to The Eastern Mound can view this original Thracian chariot and an exact copy of its bronze trim, which was found scattered at the site.

Also unearthed at The Eastern Mound were gilt silver chalices and earthenware pitchers, along with other objects that are representative of provincial Roman handicraft.