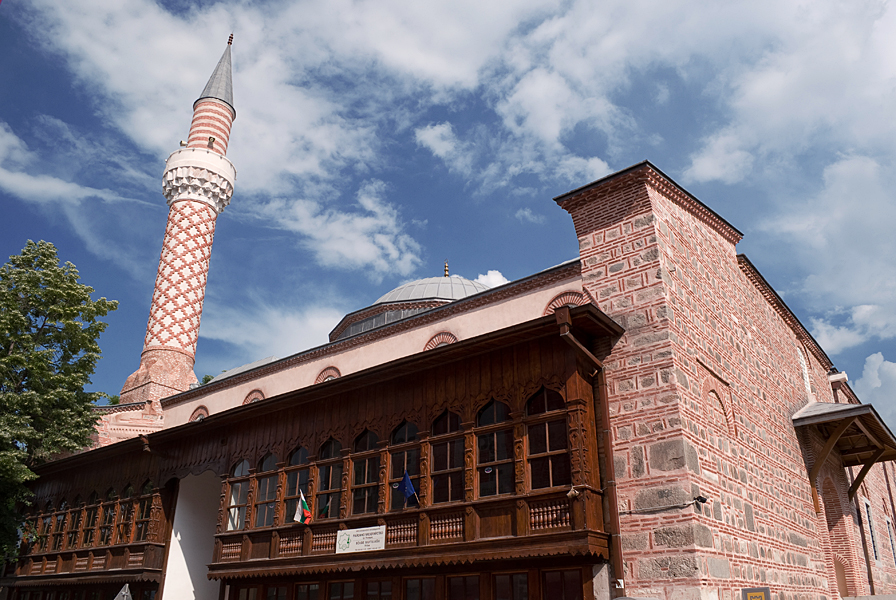 Dzhumaya Mosque is the main Muslim temple in Plovdiv. Its Turkish name is Hüdavendigâr Camii or Cuma Camii. The mosque is located in the centre of Plovdiv and was built in the place of Sveta Petka Tarnovska Cathedral Church soon after the town was conquered by the Ottoman army (1363 – 1364).  During the reign of Sultan Murad II (1421 – 1451) the old building was demolished and replaced by the modern-day mosque. It was called Ulu Dzhumaya Mosque, i.e. main Friday mosque.

Dzhumaya Mosque is one of the oldest Ottoman religious buildings on the Balkans. It is also one of the biggest: it is an imposing rectangular building with a 33 m-by-27 m prayer hall. It reveals influences from Byzantine and old Bulgarian architectural techniques: two layers of brick laid on top of each layer of cut stone.

In contrast to later single-domed mosques, the Dzhumaya belongs to the so-called multi-domed mosques. It has nine domes covered with sheets of lead. A minaret is erected at the northeast corner of the main façade, decorated with a diagonal square meshwork of red bricks on white mortar plaster.

The interior of the mosque is decorated with floral ornament wall-paintings, such as twigs, blossoms and garlands that are intertwined with medallions quoting the Koran.

The wall-paintings probably date back to the end of the 18th century and the beginning of the 19th century. Parallels can be drawn between the exterior and the interior of Dzhumaya Mosque and some of the oldest Ottoman religious monuments in Bursa, Edirne, and Sofia built in the 14th – 15th centuries.