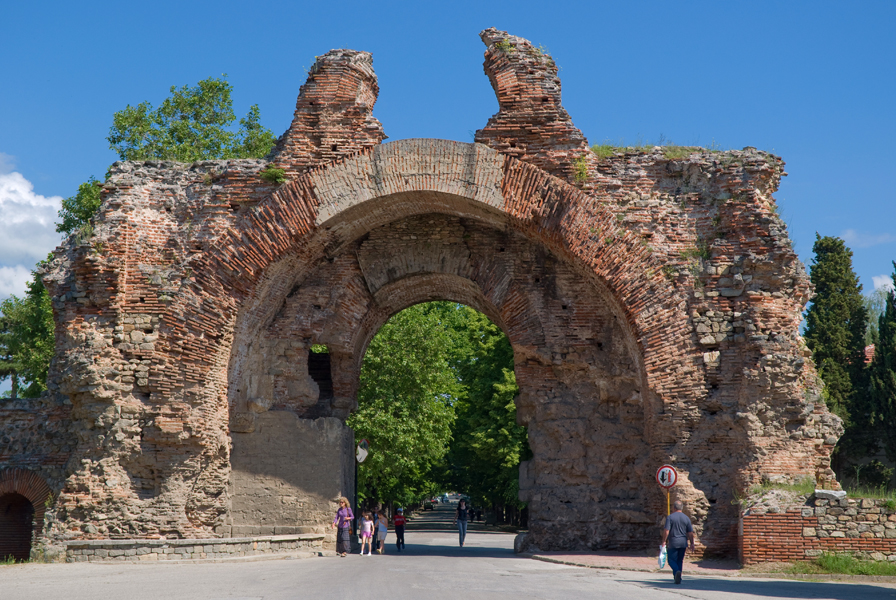 The town of Hisarya is situated in Central Bulgaria, 40 km north of Plovdiv and approximately 180 km east of Sofia. Hisarya is famous for its healing mineral waters: 16 natural mineral springs and 6 drilled mineral water wells. The town is one of the oldest and most popular balneological and spa centres in Bulgaria. The climate is mild and pleasant, and one remarkable phenomenon there is the lack of fog. Because of this fact the town is regarded one of the sunniest spots in Bulgaria. The average temperature in July is 21.4 degrees С and the average temperature in January is 1.1°С. The minimum temperatures in January are -10/-11°С.

The pleasant climate and the mineral waters of this location have proven to be attractive to settlers since ancient times. A prehistoric settlement existed in this place way back in the 5th century BC. A Thracian settlement from the 4th – 3rdcenturies BC was also established in the region. The settlement’s heyday was during the Roman era. In 293 Emperor Diocletian declared it a town and this marked the beginning of the construction of massive fortification walls, public buildings, baths, streets, etc. It became the third biggest town in Thracia Province. In terms of state of preservation and uniqueness of its fortification system, the Roman town of Diocletianopolis is among the top-ranked in Europe. The fortification wall is 2327 m long and up to 11 m high in certain sections. The southern gate also known as the Camels stands 13 m tall. The urban architecture of the ancient town is mainly situated in Hisarya’s Momina salza Park (Maiden’s Tear Park). There visitors will find a large and impressive public building (residence), thermal springs stretching over an area of around 2000 sq m, and an amphitheatre. 300 m south of the fortified town lies a Roman family tomb. It has been preserved in its original form and is open for visitors. A multicoloured floor mosaic and rose wall-paintings can be found there.

The name Hisarya derives from the Arabic word hisar which means fortress. The Archaeological Museum in the town displays finds discovered during archaeological excavations carried out in Hisarya, as well as models of the amphitheatre, a residential building, an early-Christian basilica and the Camels southern gate.

The town is famous for its beautiful, cool parks. They spread out on an area of 700 decares and include more than 160 decorative tree species.

St. Panteleimon Orthodox Temple built in 1889 is located at the centre of the town. It is well-known for its wall-paintings. St. Dimitar, the oldest Orthodox temple /built in 1845/ situated in Verigovo Housing Estate, is also interesting. In addition to these two temples, there are also: another Orthodox temple, two Catholic churches and one mosque in Hisarya.

The Hisarya Region abounds in archaeological monuments from the Thracian period. The biggest Thracian religious complex in Bulgaria dated from the 6th – 5th centuries BC is located near Starosel Village (Old Village). The residence of a Thracian ruler is situated 22 km north of it, below Kozi gramadi Peak (Goat Masses Peak), where research is in progress. A Thracian trade centre located near Krashtevich Village dating back to the 6th – 4th centuries BC is also being researched.

The road to Starosel passes through Staro Zhelezare Village where tourists can visit the House of Traditions – an ethnographical exhibition that reveals the customs and the traditions of the region through demonstrations of everyday-life activities of the past and tastings of home-cooked dishes.

The mineral waters, which the town of Hisarya is famous for, are used for the treatment of kidney and urologic diseases, gallbladder diseases, gastrointestinal diseases, as well as musculoskeletal diseases. Their healing effects can be achieved by drinking the water as well as through aqua procedures for the prevention and rehabilitation of diseases in combination with physiotherapy and diets.

Hisarya Region has great traditions in grape and wine-production as well. The tastings of local wines are both part of the local hospitality and a tourist attraction. Several wineries in Hisarya Region offer wine-tasting.