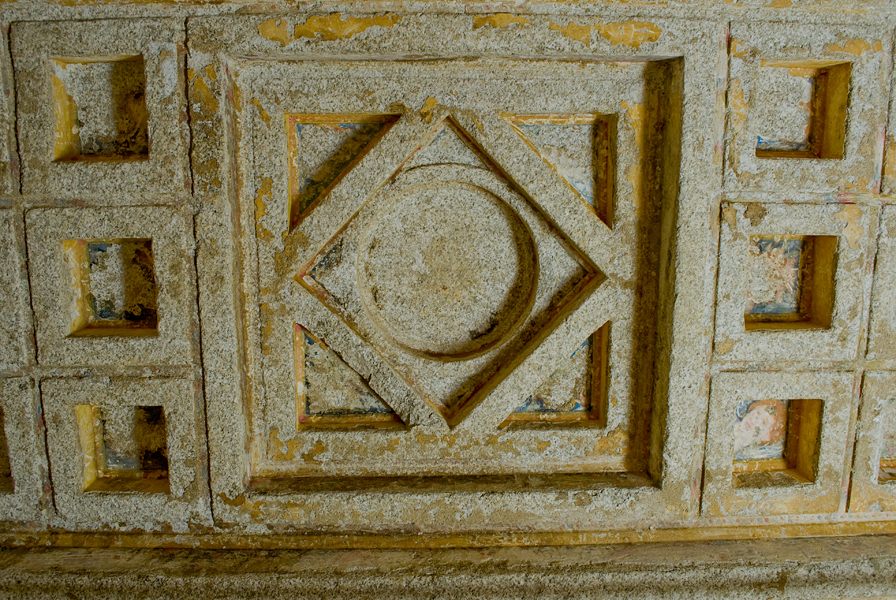 Тhe Ostrushka Burial Mound is located near the city of Shipka. In 1993, archeologists unearthed a cultic burial complex of great artistic and historical worth containing coins and other artifacts that date from the 4th century BCE.

The monumental complex has six chambers. The southern entrance opens onto the central “hub” that provides access to the other three chambers located north of it. The chamber to the right is round and covered by a cupola. The other chambers lack a monolithic tomb and are built of skillfully crafted granite blocks set at right angles. The southwestern chamber is square. Metal objects used to sacrifice a horse were found in this chamber.

A mound of equestrian trappings was found in the northwestern corner of the chamber – a headpiece in the form of two stylized axes and a three-dimensional gryphon’s head together with six silver nabuznitsi (helmet attachments). All are richly ornamented with plant and animal figures.

In the immediate vicinity were found crushed and deformed fragments of a silver vial and small pitcher.

The site is a burial chamber resembling a sarcophagus, made of a single granite monolith.

All of the granite blocks used to construct the tomb come from a quarry found on the southern slopes of the nearby Sredna Gora mountains.

The ceiling of the central chamber is covered with murals, and some of the detail is gold leaf. Best preserved is a small image of a woman’s head with long brown hair who is wearing golden earrings and a golden necklace. The skillfully executed image is done in the regular proportions consonant with realistic Thracian portraiture of the mid-4th century BCE..

After the ritual oblations were made to the ruler, this sanctuary was covered and so became a burial site.

Around the 4th century of the Common Era, the cultic burial complex was dug up and the murals on the ceiling were destroyed.

Staff at the Golyamata Kosmatka (The Great Kosmatka Burial Mound) offer guided tours to the Ostrushka site, with lectures available in Bulgarian, English, German, and Italian.

The burial site is part of the Valley of the Roses and Thracian Kings complex, which includes the Kazanlak tomb, along with sanctuaries and Thracian tombs known as Golyama Arsenalka (Great Arsenalka) , Shushmanets, Helvetsia, The Gryphons, The Saint, and The Great Kosmatka Mound.