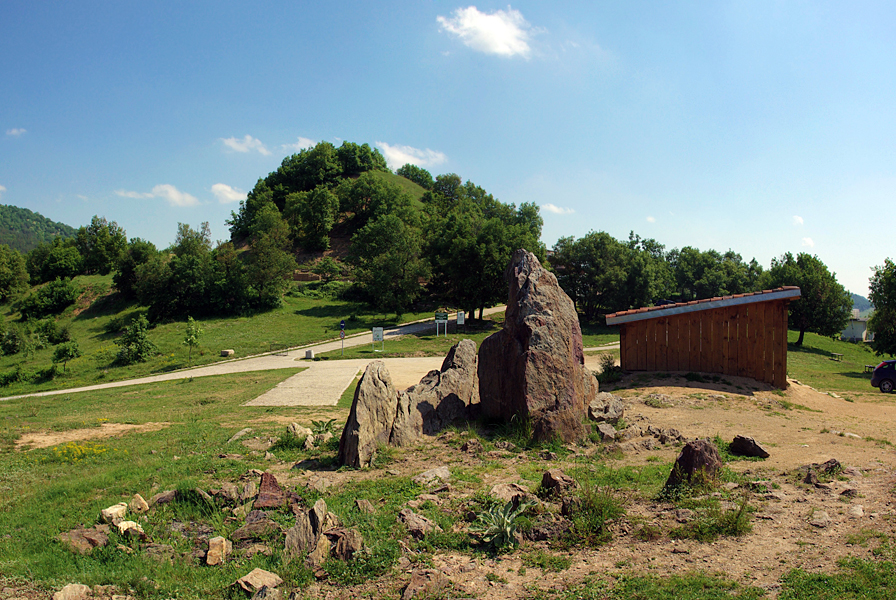 The Thracian Temple Complex in the Chetinyovata Mogila, at a distance of 4km from the village of Starosel, was found in 2000. It has a statute of a group archaeological monument of culture, declared by letter No 1480 of 04.06.2001. This is the oldest ever found royal Thracian complex with a mausoleum. It dates back to the end of 5th and the beginning of 4th century BC.

The Thracian Temple Complex at Starosel covers six underhill temples, four of which are unique, as well as a few royal burials. The large temple at Chetinyova Mogila and the Horizon temple are open for tourist visits.

The entire hill is surrounded by a wall made of processed granite blocks. Its length is 241 meters and its height reaches3.5 meters. The wall is called krepis and outlines a circle which according to the Thracian religious believes symbolizes the Sun. The entrance of the temple has a parade staircase and two pedestals, on which statues of lions were sitting.

The staircase leads the visitors to a flat platform, used for ritual dances. A corridor leads to the real façade of the temple and the round hall containing 10 decorative semi-columns and tryglyphs (rectangular plate above each column) with blue and red decoration. Religious ceremonies, related to the cult to the Mother Goddess, her son the Sun and Orpheus were performed in the temple. A warehouse for wine and water is situated on the north part of the mound.

The temple on the Chetinyova Mogila is situated on an important place, in a region with a lot of rock temples and mounds.

Information materials and souvenirs can be bought by the temple on Chetinyova Mogila.

The finds, discovered in the region from the archaeological diggings, can be seen in the National History Museum and the Archaeological Museum in Sofia.

The Horizon Mound is situated in the Manastircheto locality, at a distance of about 1.5 km from the village of Starosel. There is an indicative board-sign and a parking lot by the mound, and there is a walking track from there to the temple. The temple dates back to the end of 5th and the beginning of 4th century BC.

This is the only one found Thracian temple with a colonnade. The ten columns are placed on a foundation, with two cylinders and a capital in the early Doric style. A Thracian person of a high rank was buried inside it, which is evident by the items found in the grave – bronze arrow heads, silver beads and golden plates for sewing to clothes. For visiting the temple no tax shall be paid; at the moment there is no tourist servicing. Upon visiting the temple on Chetinyova Mogila the tour guides also provide information about the Horizon temple.