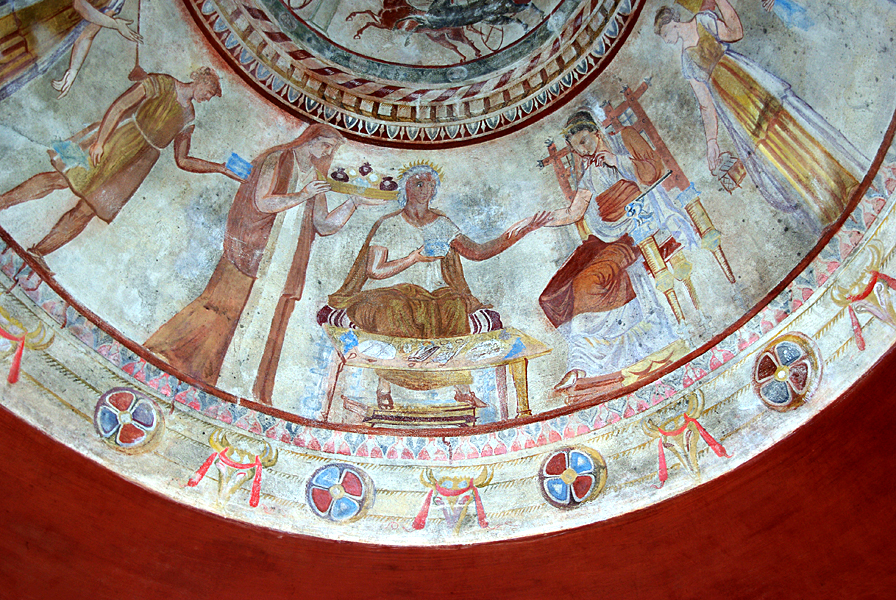 An original Thracian tomb from 4th – 3rd century BC is situated in the Tyulbeto park. It is known as the Kazanlak Tomb. It is under a special storage regime. Its duplicate, constructed in scale 1:1, which presents the architecture, the archaeological materials and the wall-paintings of the Kazanlak Tomb, is situated next to it. This Tomb is one of the most significant monuments of the Thracian culture in the Bulgarian lands, included in the list of the global cultural inheritance of UNESCO in 1979.

The tomb was accidentally found in 1944 in the north-east region of Kazanlak, and it is a significant monument of the Thracian art from the early Hellenistic age.

Based on its architectural outlook, it belongs to the dome tombs, typical for the Thracian funeral architecture from the end of the 5th and the beginning of the 3rd century BC.

It is situated in the south part of a sepulchral mound and consists of three premises: a rectangular anteroom, a narrow brick corridor (dromos) and a brick sepulchral chamber with a round plan and a bell-shaped dome.

Two burials had been conducted in the sepulchre – of a man and of a woman, by means of corpse lying, which is evident from the preserved bones. According to the archaeologists, the tomb was robbed as early as in antiquity. Two clay askoses (flat round vessel with two handles) and a silver jug were found in the mound. A clay vessel – oynohoe (wine jug) and horse bones were found in the anteroom. A sharp-bottomed amphora, clay rosette with dry gilding, a funeral crown, small parts of golden jewels and pieces of local Thracian ceramics were found in the dome premise.

The monument owes its global fame to the remarkable wall-paintings in the corridor and the dome premise – one of the best preserved products of the antique painting from the early Hellenistic age. The unknown painter had worked in four basic colors: black, red, yellow and white.

The wall decoration imitates in colors the front wall of a rich construction, coated in marble tiles and ending in architectural details. The warriors presented on the second frieze in the corridor represent a meeting between two enemy troops, and a fight scene is presented on the west wall. The scenes represent a historical event related to the life of the distinguished Thracian ruler buried in the tomb.

Figures of a man and a woman who are sitting by a small table covered in fruits are painted opposite to the entrance, in the dome premise in the center of the main frieze, and around them are presented their servants who are bringing gifts. A scene of a funeral feast with a procession is pictured. The distinguished married couple is crowned with laurel wreaths – a sign of heroisation which was widely popular during the Hellenistic age.

The wall decoration in the upper area of the dome ends with a second small frieze, which pictures three chariots pulled by two horses.

There is a shop for souvenirs and information materials by the duplicate tomb entrance.

The tomb is a part of the Valley of the Thracian Kings, which also includes the temples and the tombs found in the mounds Golyama Kosmatka, Golyama Arsenalka, Shushmanets, Helvetsia, Gryphons, Svetitsa (Female Saint) and Ostrusha.