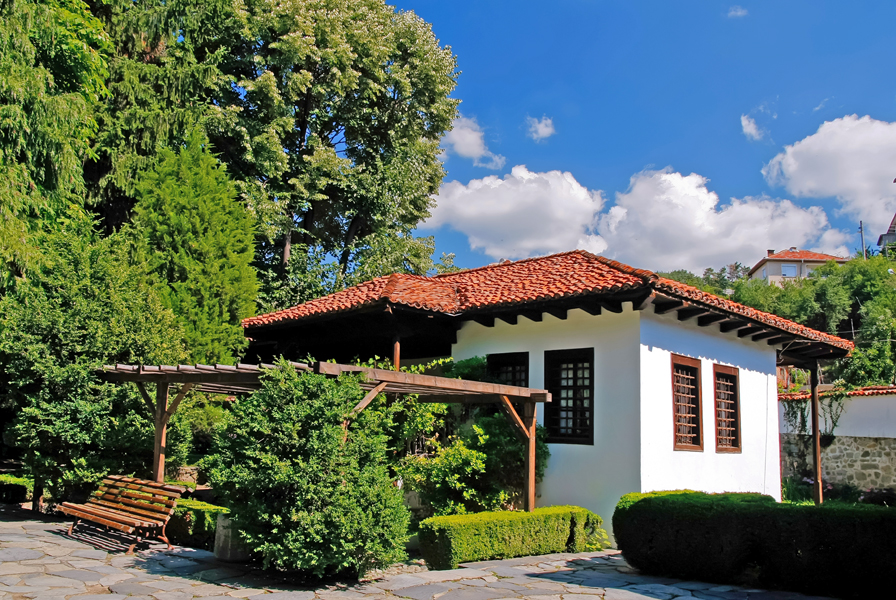 The town of Kalofer is located 155 kilometers east of Sofia, near the Central Balkan National Park. The name of the town is inextricably connected with the name of Hristo Botev (lived 1848 – 1876) – a genius poet, a brilliant publicist, ideologist and leader of the national liberation activity for the liberation of Bulgaria from Ottoman Dominion.

Hristo Botev was born in Kalofer in 1848. A museum, dedicated to him, was built in Kalofer, which stores, preserves and displays the personal belongings, documents, publications and works of the Bulgarian artist, along with other materials, associated with the life and work of Hrosto Botev, his family and his comrades.

The museum is one of the most visited museum sites in Bulgaria.

The national museum “Hristo Botev” was built at the place, where the last house of the Botev family used to be. The museum complex is situated in the center of the town of Kalofer, in Boteva Gradina (Botev Garden) park. It includes several objects – a memorial museum house, an exhibition hall, a monument of Hristo Botev since 1930 and a monument of Ivanka Boteva – the mother of the poet. The whole ensemble was declared a group cultural monument – a historical place of national importance, in accordance with the Protocol of NSOPK of 14 December 1998.

A major element of the complex is the house, where Botev lived most of his life. He wasn’t born there, but called it a native home, because this was the place where he spent his childhood. He returned to this house after his studies in Odessa and his teachings in Zadunaevka. In the same house he received the issue of Slaveykov’s gazette Gayda, where his first poem, called Maytse Si (To my Mother) was published. The house was destroyed, when the Ottoman Turks set the town on fire during the war between Russia and Turkey in 1877. On the initiative of the Kalofer citizens and patriotic Bulgarians all over the country, the building was restored, according to the memories of senior Kalofer citizens and Botev’s brother – general Kiril Botev.

The house was officially opened as a museum on 2 June 1944.

The memorial museum house is a one-storey building with a large veranda. The setting in it was recreated to look like the one in which Botev grew up. Original exhibits are the sewing machine and the spinning wheel of his mother Ivanka.

In 1973 in the memorial museum house opened a new exhibition hall of the Hristo Botev museum. It was completely renovated in 2008 to commemorate the 160th anniversary of Hristo Botev’s birth. The new exposition shows in detail, with photos and pictures, the course of life and the work of Botev. Here visitors can see the only preserved personal belongings of Botev – his pocket watch and his desktop accessories. His printing press is also shown – it printed some of Botev’s issues of Zname gazette and the first issue of his last gazette called New Bulgaria.

To the museum complex of the National Museum Hristo Botev is included a permanent exhibition called The Enlightening in Kalofer. The exhibition is situated in the building of the Daskal Botyo school.

The Daskal Botyo school was opened in 1848 and was built by initiative of Botev’s father – Botyo Petkov. It was entirely built using money from donations and  with the help of volunteers.

In 1980 the appearance of the building was restored to its original look in 1865 and the school was transformed into a school. The museum exhibits the trace the development of education and enlightenment activities in Bulgaria, particularly in Kalofer. The second floor presents the reconstructions of school rooms, ’s room and municipal room from those times.

The Art Department of Hristo Botev museum is situated on the first floor. The exhibition shows original works of Bulgarian artists, recreating the image of Botev on stone and canvas.

Upon preliminary reservations, the museum complex organizes visits to other historical landmarks of Kalofer, such as the girl’s monastery, Kalifer Voyvoda’s grave, etc.

There is a Visitor Information Center in Kalofer, which is managed by the local eco-tourism association Central Balkan – Kalofer and is open throughout the year. Employees at the center will help you plan your trip and stay by booking or hiring a guide for some of the longer routes.