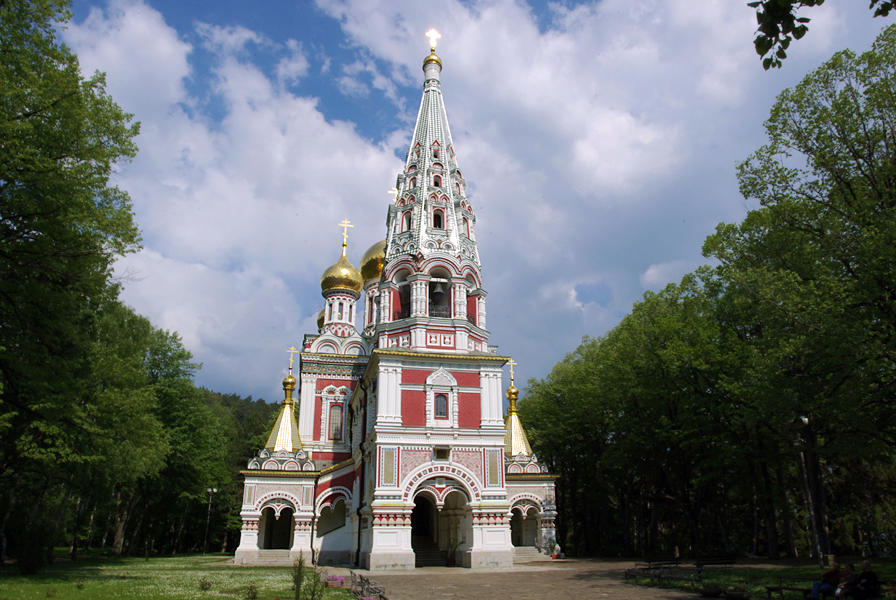 The Shipka Monastery “The Nativity” is located on the outskirts of the city Shipka.

The idea to found the monastery began with the Russian diplomat  Count Ignatiev and Olga Skobeleva, mother of General Skobelev.

Funds for construction were donated by the Russian people; the residents of Shipka gave the land. Construction began in 1885 and was completed in 1902. Also in 1902, the church was decorated with frescoes. The monastery was Russian Orthodox until 1934, when the Soviet government transferred ownership to Bulgaria. Today the Shipka Monastery is part of the Shipka-Buzludzha park and museum complex.

The monastery church was declared an architectural and cultural landmark in Issue № 33 of the State Decrees for 1970.

The church has a cruciform dome, a rectilinear nave, and three apses. On the sanctuary walls and in the outer galleries there are 34 marble plaques listing the names of officers and volunteers who died during the Russo-Turkish war of 1887-88, some of whom died in the war’s most brutal battles on Shipka Pass not far from the city of Shipka. To the west of the church, there is a bell tower that is 53 meters high containing a total of 17 bells, the largest of which weighs 1,643 kg.

The Shipka Monastery is a functioning monastery. Its annual celebration is on December 25. The monastery does not offer overnight accommodations. There are informative brochures and souvenirs for sale on the premises.