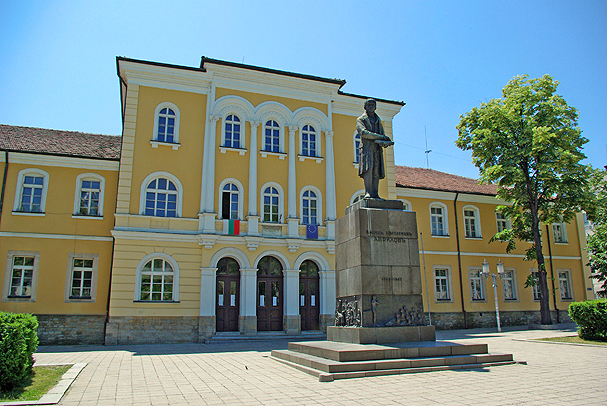 The Museum of Education in Gabrovo is unique in Bulgaria. It is housed in the building of the first Bulgarian high school – Aprilovska High School.

The displays in the five exhibition halls follow the development of Bulgarian education from the creation of the Slavic alphabet to the modern educational system through the 1990s.

The first hall covers the period from the 9th century, when the Slavic writing system was created, until 1835. Here you can also see Bulgarian before the development of the Cyrillic alphabet. The most popular forms of schooling until 1835 were monastic and monitorial schools. There are some very interesting writing tools preserved from this period.

The second hall is dedicated to the Bulgarian education system during the time of the National Revival, from 1835 until the liberation of the country in 1878. This is when the Bulgarian educational system started to develop rapidly and match the quality of the rest of Europe. During this period, education was financed by funds donated by private citizens. Many grade schools and some secondary and specialized schools were established. With teaching aids and devices from the classrooms of Aprilovska High School itself, as well as donated artifacts from around the country, the museum contains a reconstruction of classroom exhibiting some of the best preserved and interesting teaching aids of the time. Here you can see an interesting device called tellurium, which was used in astronomy classes.

The third and fourth halls cover the period from 1878 to the end of the twentieth century during which the Bulgarian education system managed to successfully integrate the legacy learning methods of the Revival into the modern international practices. The education system covered all segments of the population and Bulgaria ranked first in literacy in the Balkans. After World War II, schools and univeristies were strongly influenced by the socialist ideology and Soviet pedagogical system. The first private schools and universities appeared at the end of the 20th century.

A reconstruction of a monitorial school is exhibited in the final fifth hall of the museum. The classroom is reproduced in minute detail, even including the so-called “prison” – a space under the ‘s desk for punishment of offending students.

Informational materials and souvenirs can be purchased at the site.