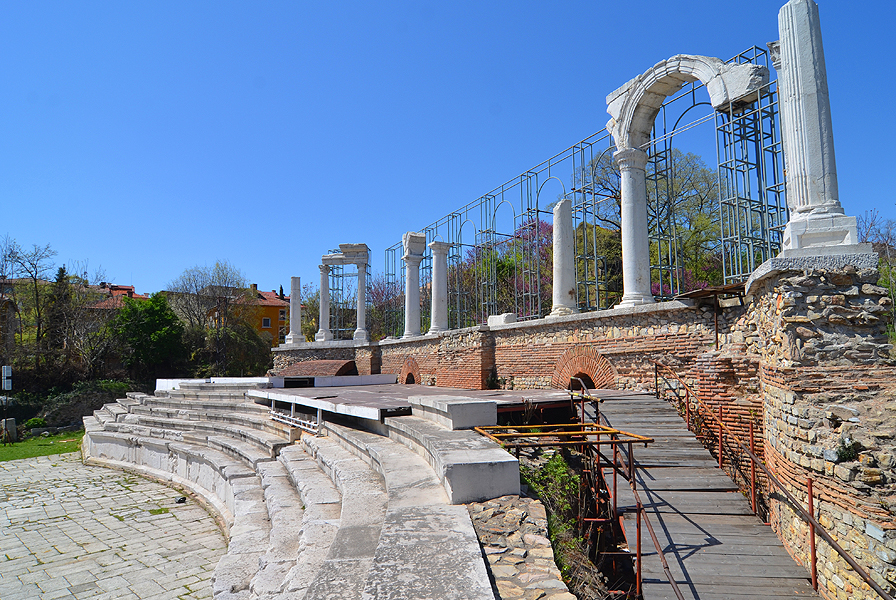 The forum of the antique Roman town Augusta Trayana is an archaeological site in the central part of the town of Stara Zagora. The site was found after construction activities in the region of the Court Palace in the town.

The antique forum complex is one of the most monumental installations in the Roman town of Augusta Trayana. The founder of the town was Emperor Trayan (98 – 117), where the name of the town comes from. Trayan was performing a wide scale urbanistic activity, but the war which he conducted in 114 – 117 to the east against the Parthian Kingdom prevented him from building the town. The real construction of Augusta Trayana began during the time of Emperor Mark Aurelius (161 – 180). Street network, water supply and sewerage, municipal and residential construction were constructed during his ruling. Two fortified walls were also constructed, reinforced by about 40 battle towers, only 11 of which had been found and researched by now. Two of the town gates – the south and the west one were also found. During this time the town obtained its right to coin its personal emissions of bronze coins. The coin making continued for almost 100 years. Temples, basilicas, baths, gates, theater building, market place, etc. were built.

The most impressive element is the forum complex situated by the west town gate. A unique element of this complex is the amphitheatrically constructed theatron facing to the square area. It had ten amphitheatrically arranged stone seats, which had been used by the viewers for watching celebrations, meetings, processions, gladiator fights, etc. The square had been covered with stone slabs, and a pedestal is preserved in its center, on which the statue of the Emperor on horse’ back was placed. Spacious baths were situated north from the theatron. They were used as public baths but they had the role of a public, intellectual, sport and educational complex. The building consisted of more than 10 spacious halls. The earliest education establishment in the town was also situated there (in the beginning of the 3rd century) – The Severian (Sever’s) gymnasium. The complex was demolished around the middle of the 5th century upon the devastating raids of the Huns, led by Attila.

As early as the first decades of its existence, Augusta Trayana was established as an important economical, political, administrative and intellectual center in the Roman province of Thrace. It had a special statute.

A large number of large scale agricultural mansions, the so called villas appeared in the 1st – 3rd century on the territory around Augusta Trayana. Among them was the Thracian villa in the region of Chatalka dam, at a distance of about 20 km west from Stara Zagora, which was researched long ago and is well known.

More than 30 Thracian temples dedicated to the Thracian God – Horse-rider are known on the territory around the town, but there are also ones dedicated to Apollo, Zeus, Hera, Athene, etc. Especially popular were the sanctuaries at the villages of Kran, Vinarovo, Kirilovo, Malka Vereya, Chatalka and Karasura. Along with these cults, the Roman goddess Roma was honored in the town.

During the same period a number of artistic works were developed in the town, among which were, music, models of stone and bronze pieces of art, gem art, pottery and glass manufacturing, and a marvelous marble statue of the legendary Orpheus are evidences of that.

The period of the late antiquity (4th – 6th century) for the region of Augusta Trayana, already known under the name of Beroe, is related to the moving of the empire capital in 330 from Rome into Constantinople, the rapid Christianization of the local population, the Goth raids in the end of the 4th century, the devastating raids of the Huns in the middle of the 5thcentury and the raids of Slavs, Avars and Old Bulgarians.

These events led to great dynamics in the political situation which was characterized by succession of periods of progress and decay.

Since the end of the 4th century, the Thracian lands had fallen within the borders of the East Roman Empire, also known as Byzantium.

Nowadays, a tribune for viewers is constructed at the antique forum, and it is used as a scene for various opera, theater, ballet and festival events.

Visits are performed only by a preliminary request in the Regional Historical Museum of Stara Zagora.