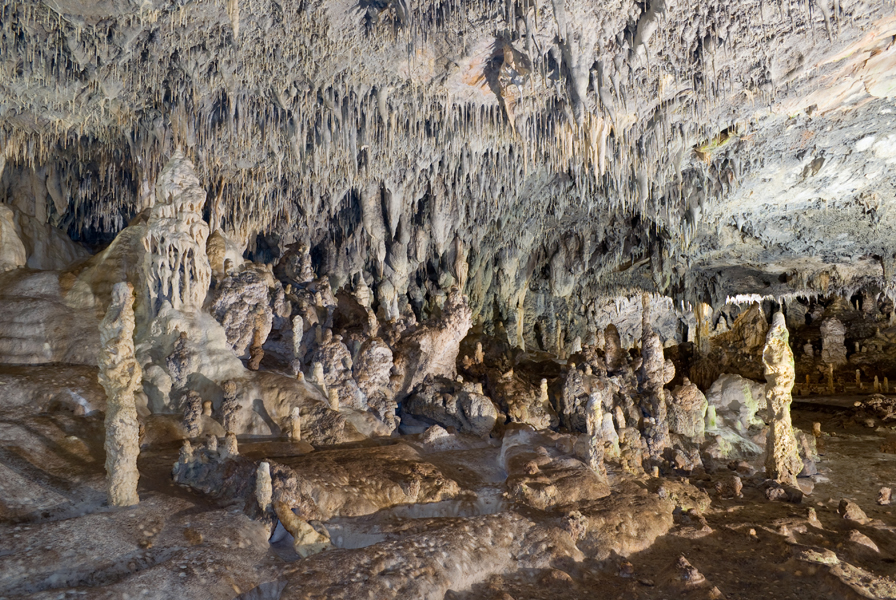 Snezhanka is one of the most beautiful caves in Bulgaria. It is also known as the Pearl of the Rhodopes and is one of the 100 Tourist Sites of Bulgaria. It was declared a natural landmark by Ordinance No 512 of 14 March, 1961. The cave has gathered all types of cave formations in its mere 145 m of length. It is situated 5 km away from the town of Peshtera in the direction of Batak.

The cave is formed by Novomahlenska River (New Quarter River). The artefacts discovered in it point that around 600 BC it was inhabited by ancient Thracians. Later it was abandoned and forgotten just to be rediscovered by tourists in 1961.

The cave is relatively small but nevertheless it is extremely rich in natural cave decorations such as stalactites, stalagmites, sinter lakes, and flowstones. Its name is derived from the bizarre-shaped snow white deposits that took millions of years to form, such as the Dolphin, the Sarakatsan, the Statue of Liberty, the Dwarfs, the Parrot, and Snow White herself – a maiden-shaped stalagmite that waits for her prince to come.  The cave comprises several beautiful rooms such as the Udder Room, the Big Room, and the Music Room that are all connected to the Cave-in which is located under a bridge. The formation that is compared to Snow White (Snezhanka), the fairy-tale character that the cave is named after, can be found in the Magic Room, the last chamber accessible to visitors.

The biological diversity in the cave includes interesting troglobitic species – organisms that are perfectly adapted to live underground. Four types of bats inhabit the cave: the Greater Horseshoe Bat (Rhinolophus ferrumequinum), the Lesser Horseshoe Bat (Rhinolophus hipposideros), the Geoffroy’s Bat (Myotis emarginatus) and the Greater Mouse-Eared Bat(Myotis myotis). Some of them can be seen in the lighted areas that are accessible to tourists. They must not be disturbed.

The cave is well-developed and is open for visitors every day. There are a tea house and a souvenir stand near the entrance. Groups of visitors are formed every hour.

It is forbidden to take photographs in the cave. The cave is under a 24-hour video surveillance.