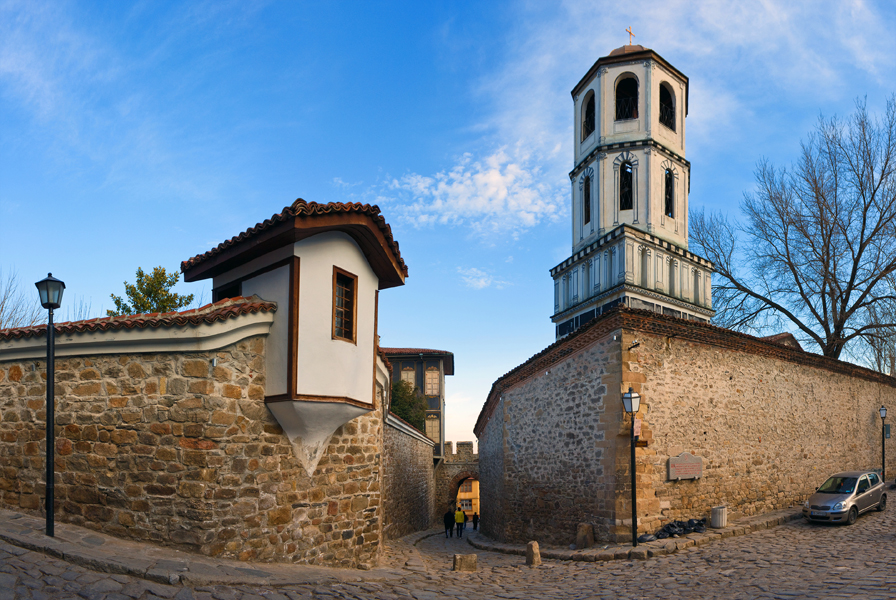 The Saints Konstantin and Elena Church is one of the oldest churches in the city of Plovdiv. There was a sanctuary at the present site as early as the 4th century.

Located in the center of Plovdiv’s Old Town, it is situated on what were once the fortress walls of the city’s acropolis. The church is part of the architectural complex “Old Plovdiv” that includes the Mosque Dzhumaya Dzhamaya (14th-15th century), The Assumption of the Blessed Virgin Cathedral, The Saint Marina Church, a Bulgarian Orthodox Bishopric, and the Roman Ampitheater. Located in the immediate proximity of the church is the so-called Hisar Kapiya, which was the ancient city’s eastern gate during Roman times, when it was part of the route to the Far East.

In 304, at the spot where the church now stands, the martyrs Saints Severiyan and Memnos were beheaded for their faith, following the martyrdom of another 38 Christian believers. When the name of the Emperor Konstantin began to appear on parchment lists of Christian saints, inhabitants of Plovdiv decided to dedicate the existing church in his and his mother’s honor, which is how the church came to be called The Saints Konstantin and Elena Church.

During the Ottoman rule, at the location of the large ancient church there was only a small wooden church with a single nave and lacking a cupola and belfry. It was crumbling and dilapidated, with only a small entranceway. This is explained by the fact that the Ottomans placed severe restrictions on the size of Christian churches.

During this period, the church was destroyed and rebuilt many times. There are records indicating that in 1810 Todor Moravenov, a well-regarded weaver from Koprivshtitsa, was the guardian of the church. After one of the last times that  the church burned down, at the end of the 18th century, the walls of the sanctuary were reduced to ruins. At that time Moravenov began to collect funds to rebuild it. In 20 years he managed to raise some 200,000 grosha – a substantial amount, more than enough to complete the initial planned repairs. In 1830, the Plovdiv social activist Valko Chalakov managed to gain a ferman (official approval) from the Sultan to reconstruct the churches Saints Konstantin and Elena and Holy Sabbath (Holy Sunday), along with other Christian churches. The present church is the one rebuilt as a result of that decree.

In the 1950s, during excavations of the church’s apse, a number of interesting discoveries were made, including a rectangular tower that was part of the fortified ancient eastern gate, Hisar Kapiya, along with an ossuary containing the remains of ten generations of respected Plovdiv residents. These remains are now buried in a communal plot at the eastern side of the church. Above their grave there is a marble plaque with an inscription.

The church courtyard is surrounded by sturdy stone walls between 6 and 8 meters high, topped with a thick brick cornice. A number of smaller structures have been erected in the courtyard, giving the church complex the appearance of a monastery. Today The Saints Konstantin and Elena Church is a valuable religious, historical, and cultural landmark in the city’s Old Town. For that reason it is the most-visited Bulgarian Orthodox church in Plovdiv, both by Bulgarians and international tourists. It was declared an architectural landmark in the fourth number of the State Decrees for 1995.