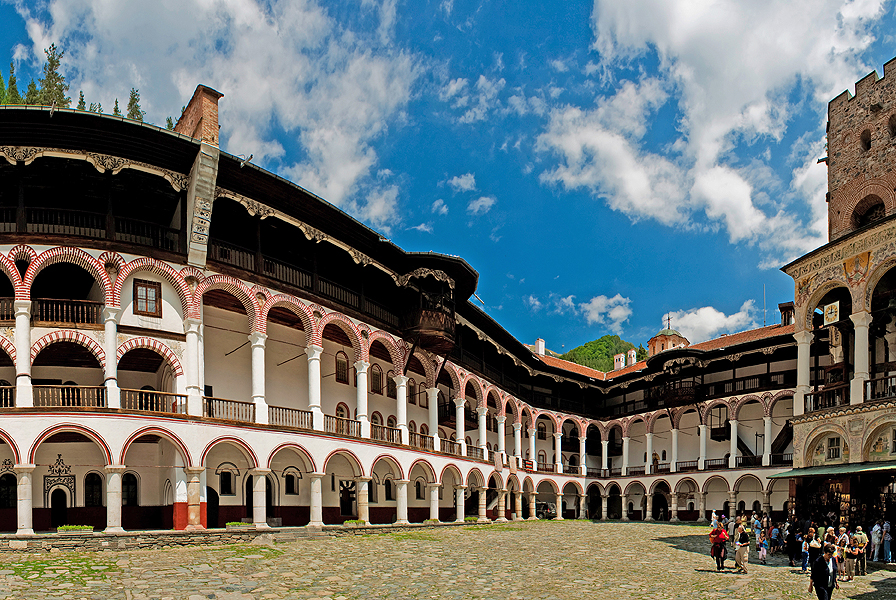 Rila Monastery is one of the symbols of Bulgaria and is also a popular tourist destination. The monastery lies in the recesses of Rila Mountain, between Rilska and Drushlyavitsa Rivers, at 1147 m above mean sea level. It is located about 120 km away from Sofia and 41 km away from Blagoevgrad.

Rila holy cloister was founded in the first half of the 10th century. Its history is directly related to St. Ivan of Rila, the first Bulgarian hermit, who settled in the region and devoted his life to fasting and prayers. The monastery was initially situated near the cave where the saint dwelled. After he passed away in 946, St. Ivan of Rila was buried in the cave in which he found solitude. Tsar Peter (who reigned in the period 927 – 969) brought the relics of the wonderworker from Rila to Sredets (Sofia). It was probably then when he was canonized as a saint. The relics were returned to Rila holy cloister in 1469.

Throughout the centuries Rila Monastery has always been the spiritual, educational and cultural centre of Bulgaria. During the Bulgarian Revival Period (18th – 19th centuries) Rila Monastery set up approximately 50 metochions in the large Bulgarian towns and villages where some of the most well-educated Rila monks performed their religious rites, established schools, and brought pilgrims to the monastery.

Rila holy cloister got its present appearance in the 19th century and only the new part of the eastern wing of the monastery dates from the 20th century. Hrelyo’s Tower, the oldest building in the holy cloister was built in the 14th century (1335). It was the monastery’s fortress and also the place where monks dwelled in times of trouble. The Chapel of the Transfiguration of God is on the fifth and last floor of the 24 m-high tower. At present Hrelyo’s Tower is open for visitors in the summer and some of the 14th century wall-paintings can be seen through the window niches of the chapel.

The total area which the holy cloister takes, together with the church, the residential, and the farming buildings, is 8800 sq m. The monastery courtyard, the Birth of the Virgin Mary Temple, Hrelyo’s Tower, the museum, the residential and the farming buildings are surrounded by 22 m-high stone walls. There are around 300 rooms in the monastery, 100 of which are monastic cells.

The Birth of the Virgin Mary main church of the monastery was built in the place of an old temple in 1834 – 1837. It is a five-domed, cross-in-square building. It has two side chapels and three altar niches. The wood-carved iconostases and the wall-paintings by masters from Samokov and Bansko are impressive. Many artists and wood-carvers worked in the temple but only Zahari Zograf left his signature. The church preserves the coffin with the relics of founder of the monastery St. Ivan of Rila, the 12th century Virgin Hodegetria wonderworking icon, the 17th century St. Ivan of Rila wonderworking icon, and many other iconostasis and icons for believers to kiss from the 19th century.

A museum which exhibits items providing information about the history of the monastery throughout the centuries was established in Rila holy cloister at the end of the 19th century. The museum exhibition comprises valuable examples of Bulgarian and foreign art from the 14th – 19th centuries. The most valuable exhibit is the wooden cross decorated with exquisite miniature wood-carvings by Father Rafail. The master wood-carver used the finest chisels and tools and worked for many years until he finally finished his masterpiece in 1802, when he lost his sight as a result of the hard toil. It depicts 36 biblical scenes – 18 on each side, and over 600 miniature figures.

Weaved national costumes from different ethnographic regions and various vessels donated by different towns and visitors of the monastery are displayed at the Ethnographic Museum and in the guestrooms from the Revival Period in the northern wing of the monastery. The visitors who wish to see them must pay an admission fee at the Church-History Museum.

Rila holy cloister is a functioning monastery. There are car and coach parks outside the two monastery gates. Accommodation is available at the monastery. Icons, albums, cards, souvenirs, and traditional Bulgarian crafted items are sold at the monastery bookstore, the shops at Hrelyo’s Tower, and in the area around the monastery.