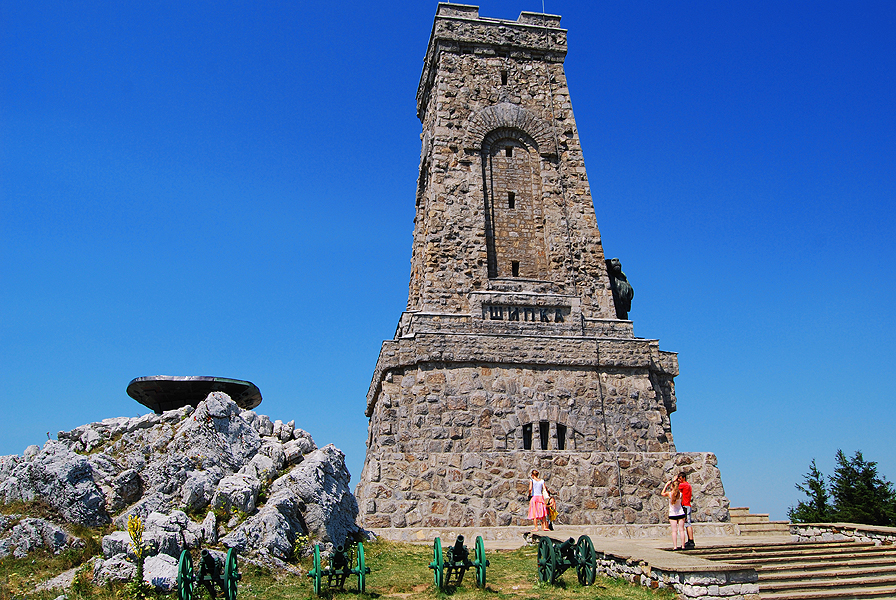 National Park Museum Shipka is located on top of St. Nicholas Peak in the Balkan Mountains, 28 km from the town of Kazanlak and 22 km from the town of Gabrovo. The park comprises of 26 monuments, the reconstructed battle positions, artillery batteries and dugouts of the defenders of Shipka Pass during the Russo-Turkish War from 1877 – 78.

The Liberty Memorial is among the largest of the monuments in the park. Its outline resembles a medieval Bulgarian fortress and can be seen from dozens of kilometres. It was built with donations from the people from all over Bulgaria and was inaugurated on 26 August 1934. It is 31.5 m tall and 890 steps lead up to it.

The powerful bronze lion – symbol of the Bulgarian state – guards the entrance to the Memorial. The other three walls of the monument bear the names Shipka, Sheinovo and Stara Zagora – the battlefields in defence of the Pass.

On the ground floor under a marble sarcophagus rest the remains of Shipka’s defenders. The sarcophagus stands on four prone stone lions and above it as honour guards stand the statues of a Bulgarian Opalchenets (member of the voluntary Bulgarian army units) and a Russian solder.

The other seven floors of the museum display personal effects of the solders and volunteers, medals, photos, weapons and documents related to the battles fought over Shipka. One of the exhibits is a copy of the Samara Flag – the first battle flag of the Bulgarian Opalchentsi. The highest platform of the Liberty Memorial affords a beautiful panoramic view of the surroundings.

There are information materials and souvenirs available for sale at the Park-Museum. There are also hiking and motor tours to the monuments within the park.

The Russo-Turkish War from 1877-1878 was between the Ottoman Empire and Russia. Serbia, Montenegro and Romania, the Bulgarian Opalchentsi and the Finnish Guard Regiment also took part in the war on the side of Russia. The war ended with a victory for Russia and the signature of the Treaty of San Stefano, subsequently superseded by the Treaty of Berlin. The Russo-Turkish War is known as the War of Liberation as it brought complete independence to Serbia, Romania and Montenegro, while a part of Bulgaria was declared a vassal principality. The rest of Bulgaria remained within the boundaries of the Empire as the autonomous province of Eastern Rumelia. In the autumn of 1885 Eastern Rumelia united with the Principality of Bulgaria.