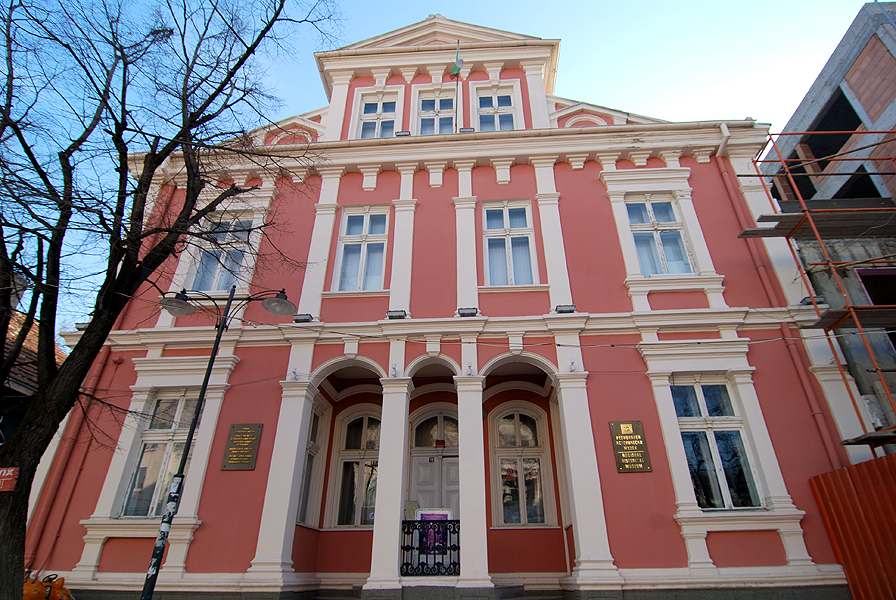 The regional historical museum of Sliven is housed in a beautiful building on the main street of the town. It is one of the oldest institutions in Sliven. It was established in 1913 as a museum at the community center “Zora”.

The renovated exposition of the Museum, entitled “Treasures – Museum – Memory” was opened on 12 May 2008 celebrating 130 years of the beginning of museum activity and 95 years of the establishing of the museum in Sliven.

Original monuments of the museum fund are included in the exposition, some of which are of global significance and are related to the life of the Sliven region population from the Neolithic Age (6000 years BC) to the present day. The exponents are arranged according to a collection principle.

Marble and bronze statuettes from Roman times, objects and jewels made of bone from the antiquity to the middle ages are presented in the halls on the first floor. One of the most significant archaeological monuments is the inscription made upon a pedestal to the memory of God Zeus. Interesting objects are also the small bronze pieces of art – applications, statuettes, medical instruments, etc.

The collection of jewels made of forged copper is placed on the second floor. There is also a unique collection of guns from the age of Revival – the sword of Panayot Hitov (Bulgarian revolutionary, 1830 – 1918), yataghans, flint mechanism, various types of firearms.

The finds of the so called Valley of the Thracian Kings are shown on the last floor. They were found in the summer of2007 by an archaeological expedition, led by the renowned Dr Georgi Kitov (1943 – 2008). Luxurious ceramic pots, tombstone gifts, decoration for horse ammunition, amphorae, etc. are presented. The two silver rhytons are of highest artistic value. The second golden mask found in the Thracian region is presented here, as well as two golden phials for wine drinking and golden stamp ring are also presented here. An interested object is the rhyton with head of a horse and body of a cock unfamiliar for the Thracian region, and a silver helmet which is the only one made of this metal.

The regional historical museum of Sliven includes the following sites: