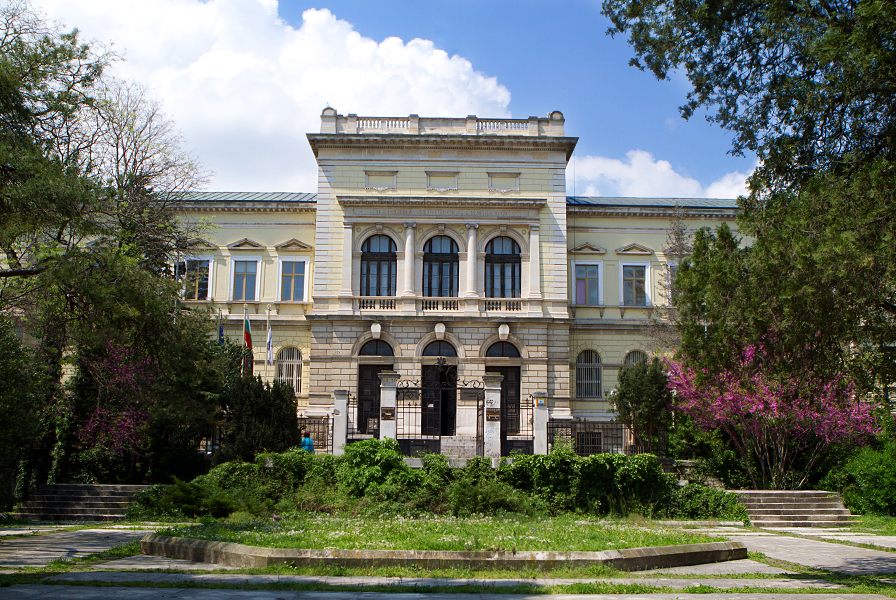 The Archaeological Museum of Varna was established in 1887 by the brothers Karel and Herman Shkorpil (archaeologists and scientists of Czech and Bulgarian origin, founders of the Bulgarian archaeology and museum activity).

The building in which it is housed was constructed in 1892 – 1898 for a school – a Girls High School. It was built in a late baroque style with basement premises and two floors. It has an almost square shape and a spacious internal yard.

The exposition area of the museum is 2 150 square meters. There are also funds, a library and a children education museum.

Some of the premises and the corridors are decorated with wall paintings. A continuous corridor surrounds the entire building and one can enter the exhibition halls through it.

Along a wide staircase at the south part, one enters a foyer, where the information desk and the pavilion for souvenirs and museum issues are placed. This is the connection with the exhibition halls and the basement area, where the library and the single children education museum in the country is situated.

The archaeological museum shows original finds from the Paleolithic Age /about 100 000 years BC/ to the Middle Ages/7th – 8th/ century, many of which are of great significance to the archaeology of Europe and the world. The largest Mesolithic collection of flint tools in South-East Europe, the largest collections of ancient terracotta, tombstone reliefs, lamps and glass vessels in Bulgaria are placed here.

The most significant exponents in the museum are from the Varna Eneolith necropolis which was found during accidental construction works in the west industrial zone of Varna in 1972. The Varna necropolis soon turned into a sensational scientific find, the significance of which surpasses largely the limits of the ancient history of contemporary Bulgaria. As a result of the researches, 294 tombs have been found by now. The golden objects alone, found in the examined tombs, are more than 3 000, and have a total weight of more than 6 kilograms, and their diversity is significant – more than 38 different types. Very large is also the quantity of finds of other materials – the copper articles are more than 160; the flint articles – more than 230; almost 90 made of stone and marble. Multiple shells of Mediterranean mollusca have been found, and about 1100 decorations have been made of them – bracelets, beads and applications. The ceramics – more than 650 clay pots, is an often found tomb inventory. Among them, two pots occupy a specific place. The decoration on their surface is painted with golden paint.

Unique exponents of the Hellenistic age, the Roman age and the Late Antiquity are presented; as well as rare premonetary forms, more than 2000 golden, silver, bronze and copper antic and middle age coins. Stone inscriptions from the history of the Bulgarian state are also presented; and also the largest in the country collections of early Bulgarian belt decorations and jewels from time of the Second Bulgarian Kingdom (1185 – 1393).

A representative part of the rich collection of the museum is presented in six halls – 150 icons (14th – 19th century). Here you can see exceptionally rich and old specimens, as well as top achievements of the Tryavna icon-painting school. With its icon collection, the Varna Museum is ranked immediately after the National History Museum in Sofia.

The exposition is arranged chronologically, as materials from the various historical ages are consecutively presented, in order to trace the development of the human society during thousands of years in the Varna region.