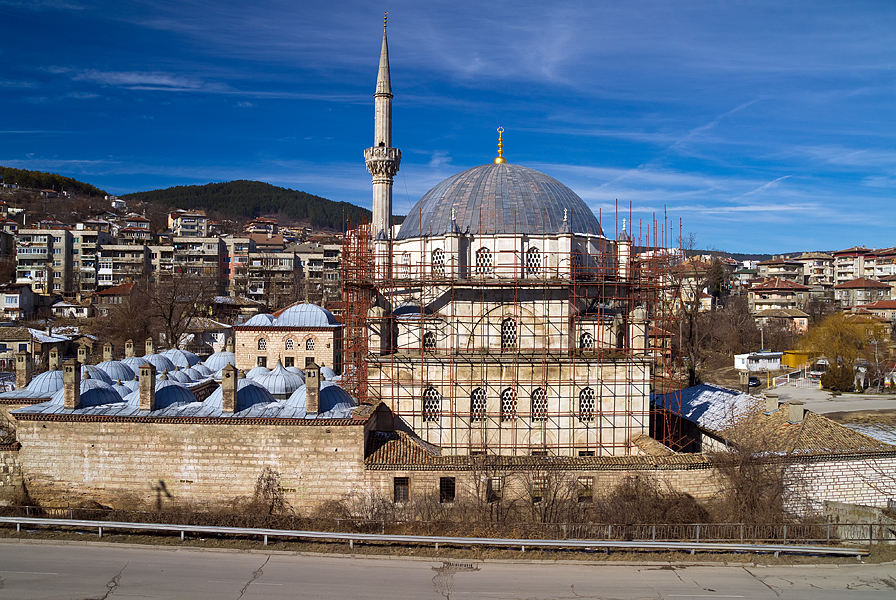 Sherif Halil Pasha Mosque, also known as Tombul Mosque is located in the town of Shumen. It was built in 1744. The design of the temple was influenced by the tulip oriental architectural style which developed at the beginning of the 18th century. It is characterised by the inclusion of elements from the French Baroque.

Together with the complex of buildings surrounding it, the temple is the biggest and most architecturally significant mosque in Bulgaria and is preceded only by Selimiye Mosque in Edirne, Turkey on the Balkan Peninsula.

Tombul Mosque was declared a monument of architecture and construction by virtue of publication in State Gazette, issue No 22 of 1975. The mosque is also one of the 100 Tourist Sites of Bulgaria.

The architectural complex takes up an area of 1730 sq m. All parts of the complex are included in a common structure and are interconnected by inner courtyards.

An open lobby area with tall Moresque arcades leads to the prayer hall. It is supported by four massive marble columns. There are five domes in the lobby area.

The main edifice of the temple is a square-plan (15 m x 15 m) rectangular prism. The prayer hall is lit by four rows of windows, the upper three rows being made of stained glass. The interior and the exterior are decorated with sculptural ornaments and Baroque elements.

Original paintings on the ceilings and the walls covered by subsequent layers of paintings were discovered during research on the interior carried out in 2005.

The balcony in the hall is the place where women pray. The acoustics of the Prayer Hall is perfect. This is achieved by the  numerous clay pots built in the dome and the walls. Quotations of ayahs from the Koran and sayings of the Prophet Muhammad (hadiths) can be seen on the walls.

The madrasa complex (a Muslim secondary or higher school), comprising twelve rooms where students used to live and a second-floor library, is located to the left of the prayer hall. The library held extremely valuable copies of works in Arabic and Persian, as well as maps drawn by Muhammad al-Idrisi, the famous Arab geographer who worked and lived at the beginning of the 12th century, before they were moved to storage to St. Cyril and St. Methodius National Library in Sofia.

The minaret of the mosque stands 40 m tall and has 99 spirally-arranged stone stairs and a small balcony. A large fountain is built in the spacious courtyard, which is also referred to as the arcade courtyard because of the shape of its arches. The fountain is used by Muslims to perform the so-called wudu – the ritual washing before the prayer.

Since it was built Sherif Halil Pasha Mosque has never closed its doors for a single day. Nowadays the mosque does not just function as a temple and a religious centre but it is also a very popular tourist attraction.

Information materials and souvenirs are sold at the mosque.