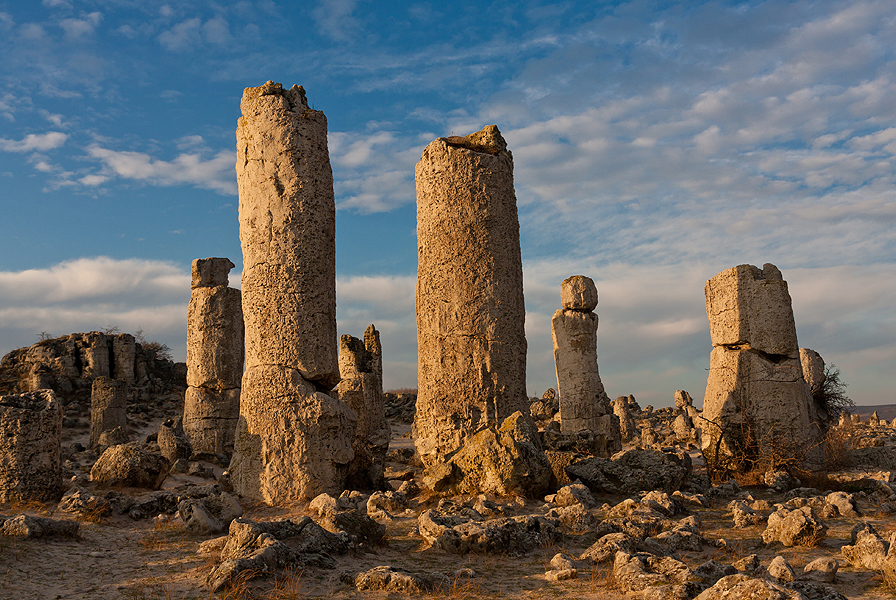 The natural phenomenon Pobiti Kamani, also known as The Stone Forest and Dikilitash, is situated on an area of 7 square km at a distance of about 18-20 km from the city of Varna, and a few kilometers from the town of Beloslav.

The natural landmark consists of an ensemble of stone columns, up to 10 meters high, hollow or thick cylinders, crossed cones, variously shaped and sized rock blocks and multiple stone pieces, spilled around the entire complex.

The Pobiti Kamani had been famous as a sacral place since antiquity, but they were documented for the first time in 1829. They were declared a natural landmark by Order No РД-817 of 23 August 2002.

For thousands of years the nature has carved stone pieces in order to turn them into impressive sculptures, which look like people, animals, monsters, mythical creatures, etc. “The Stone Guards”, “The Camel”, “The Throne”, “The Stone Forest” are names of just a part of these natural pieces of art.

The ensemble “Dikilitash Group” is the most famous and attractive for the tourists. It is situated at about 18 km west from Varna and is easily accessible from Route Е70. The complex consists of more than 300 different in size columns, situated in a stripe with sizes 850 meters x 120 meters, and about 50 structures are situated in a smaller area to the south. Some of the columns are broken in two or three parts, other are lying on the ground as if they had been uprooted from their places, and others form interesting sculpture groups.

The Strashimirovska Groups is also impressive. It is situated to the south of the basic group, near the village of Strashimirovo, and consists of four closely situated ensembles containing structures with various sizes and shapes. A typical peculiarity of the columns here is that they are bulging in the middle, as if two crossed cones are stuck to their bases, as some of them reach up to 9 meters in diameter.

The groups “Slanchevo” and “Banovo” are situated in the localities of the villages with the same names, and also have their own charm. One of the stone structures looks like a frozen fountain. A stone lion with basis diameter of 12 meters is lying in close proximity. Colossal mushrooms can also be seen nearby. If you have good imagination, you can differentiate other shapes as well.

The rest of the groups are situated around the town of Beloslav and are also worth seeing.