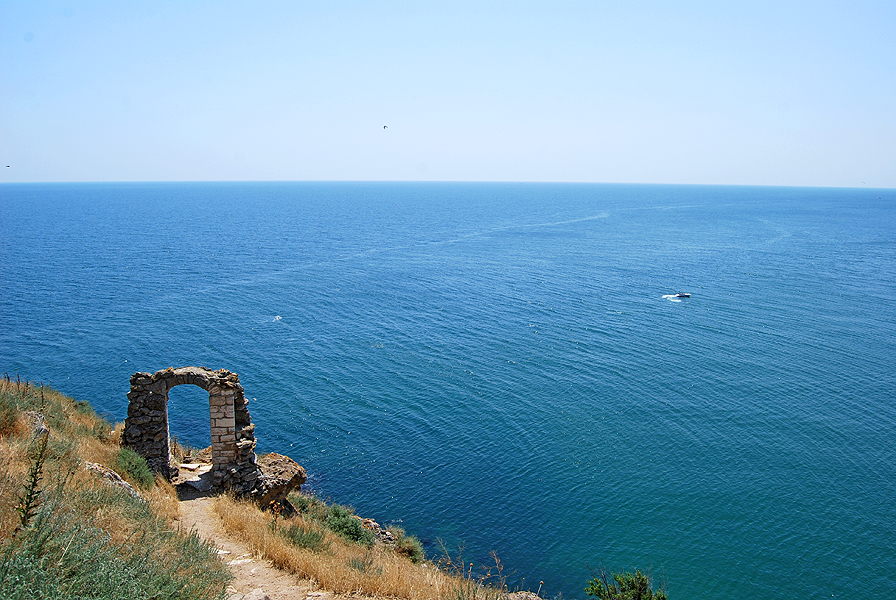 Cape Kaliakra and the architectural reserve on its territory are located 12 km southeast of Kavarna. Cape Kaliakra is the eastern-most point of the Bulgarian Black Sea Coast. It is an oblong, narrowing rocky peninsula that juts out about 2 km into the sea. The rich history, the well-preserved landscape, and the beautiful panoramic views make Cape Kaliakra one of the most attractive tourist spots on the Black Sea Coast.

The slopes of the cape take a 60 – 70 m plunge straight into the sea. The waves have carved caves and arches at its foot that can be approached only by the sea. In the past these tunnel-caves were connected to the fortress and were used for loading and unloading ships.

Kaliakra is a nature and archaeological reserve. It stretches over 687.5 decares and comprises wild steppes and incredible coastal rocks. More than 400 plant species can be found in the reserve. A total of 310 kinds of birds live on the territory of Kaliakra and 100 of them require special measures for their habitats preservation. 106 of these bird species are protected at European level. The European Shag (Phalacrocorax aristotelis) nests here. The region is extremely important for migrating birds because Via pontica, the second biggest migratory route in Europe, passes through it. Every autumn between August and October thousands of birds fly through the reserve. This includes more than 29 000 storks, pelicans, and cranes, as well as over 3000 birds of pray, including the globally endangered Pallid Harrier /Circus macrourus/, Saker Falcon /Falco cherrug/ and Eastern Imperial Eagle /Aquila heliaca/. Dolphins can be spotted in the sea around the cape.

The first records providing information about the people who lived on the cape date back to the 4th century BC, when the region was inhabited by Tirisis, a Thracian tribe. This was probably the reason why the first name of the cape was Tirisis. Later the fortified wall that was initially laid by the Thracian tribe was restored and another fortified line was built. The settlement consisted of two parts: inner town and outer town. The first wall protected the town from the direction of the land. Its remains now stand 2 m high and 440 m long. The remains of many buildings were discovered on the territory of the outer town. A large building that used to be a 4th century AD bath has been preserved to this day and can be found there. Tourists can also see an almost completely preserved vaulted mason tomb from the same period. During the archaeological digs several medieval churches were discovered as well.

The name Kaliakra, which means “beautiful cape”, was first mentioned in the 13th – 14th centuries. In the 14th century the Bulgarian state was divided in three, and Kaliakra became centre of its eastern-most part and established itself as a big international harbour.

There are many legends related to Cape Kaliakra. The most famous one tells the story of 40 Bulgarian girls led by the beautiful Kaliakra who jumped from the rocks and into the sea to escape from the Ottomans. They braided their hair together to make sure no one would back away.

A museum that preserves many archaeological finds discovered on the territory of the reserve is set up in one of the caves of Cape Kaliakra. The model that demonstrates how the ancient fortress looked like in the past is one of the most attractive exhibits in the museum.

The fortress was declared an architectural monument of culture of national importance by virtue of publication in State Gazette, issue No 73 of 1967, while Cape Kaliakra was declared a nature preserve by Ordinance No 16298 of the Council of Ministers of 27 September, 1941.

During national holidays Cape Kaliakra is beautifully lit up by powerful floodlights and thus transforms into a magical place that combines the ancient history with the romantic side of the sea.

Information materials and souvenirs are sold at the museum.