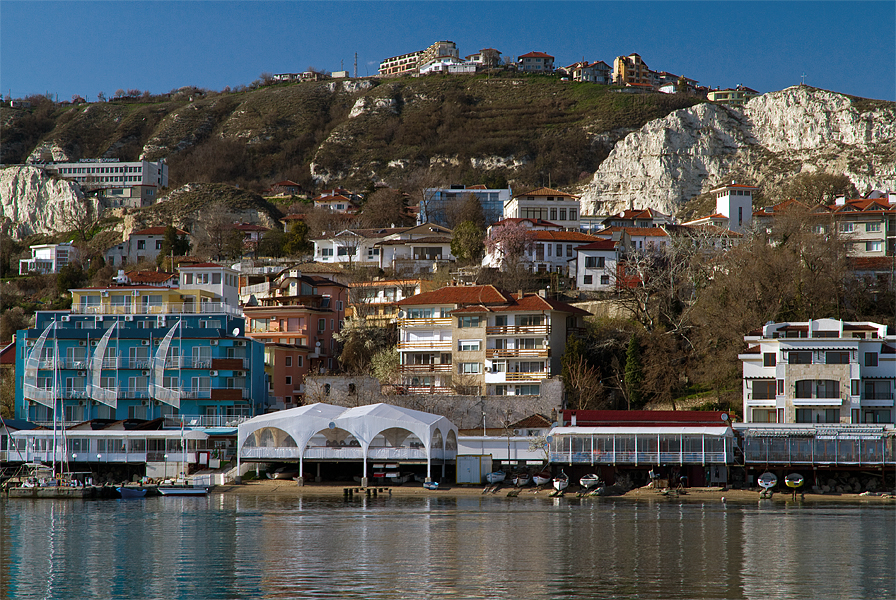 Balchik is situated in the north-east part of the Bulgarian Black Sea shore, 40 km from Varna and 20 km from Kavarna.

The town was established 26 centuries ago by Greek settlers named Krunes. In the 6th century BC the town was named after the Greek God of wine and joy – Dionysus – Dionisiopolis.

In the 4th century BC Dionisiopolis was quite an important economical center. That is evident by the found coins, which had been coined in the town. The name of the God Dionysus was carved on them. The cults for the God of Wine and the Great Mother Goddess Kibela were largely spread.

In the 1st century AD the town became a part of the Roman Empire, and it reached its greatest prosperity in the 2nd – 3rdcentury. After the dividing of the Roman Empire in 395, the close proximity of Constantinople – the capital of the East Roman Empire, had a significant influence upon the development of the town. Then the settlement turned into an important administrative and port center. In 544 – 545 the town was demolished by a powerful earthquake which caused high tidal waves. The residents who survived moved and started building their settlement anew at the place of today’s residential section of Horizont in Balchik. In the early Middle Ages the town was one of the regional centers of the Bulgarian Kingdom of Karvuna. In the end of the 14th century, Dobrudzha was conquered by the Ottoman Turks, and in the end of the 16th century the town was already named Balchik. Balchik was liberated from the Ottoman Dominion on 31 January 1878.

In the beginning of the 20th century here was constructed the largest mill on the Balkan Peninsula. Near 70 000 tones of grain had been exported from the town, and more than 500 ships had been used for this purpose. The grain travelled to England, Belgium, Germany, Denmark, etc.

The district of South Dobrudzha, in which Balchik is situated, was annexed in 1917, in the end of the Second Balkan War, and this way Silistra, Tutrakan, Dobrich, Balchik and Kavarna remained outside the borders of Bulgaria. As of 7 September 1940 South Dobrudzha was returned to Bulgaria.

A large number of the finds, made during excavations in the region, are stored in the Historical Museum of Balchik. The exponents speak of the creation and the development of the town in Antiquity and the Middle Ages. The period in which Balchik and South Dobrudzha were under Romanian ruling are presented by pictures and documents. All finds and marble statues from the Kibela Temple are stored in the museum. The Temple of Kibela was found in 2007, and according to archaeologists it dates back to about 280 – 260 year BC. 27 preserved inscriptions were found in the remains of the temple, and almost all images are of the Goddess Kibela. After the earthquake in the middle of the 6th century, the temple was covered up. Nowadays it is accessible without paying an admission fee. On request of the tourists, a curator of the Historical Museum can tell the history of the temple on site. During visiting the site, be careful because it has not been maintained and is situated at the bottom of a deep ditch.

The building of the Ethnographic Museum is situated opposite to the building of the Historical Museum. The museum is housed in a house from the Period of Revival, which was an ownership of a tradesperson from Balchik. Domestic articles, jewels and traditional clothes are presented here. Special place is made to crafts such as: copper making, homespun tailoring, etc. Traditional costumes from Dobrudzha and Kotel can be seen on the second floor of the museum, as well as interesting tools, such as carding machines (devices for wool combing), distaff, looms, etc.

Tourists can learn more on the development of Balchik during the Revival (18th – 19th century) in the Mutual School and the church St. Nikolas, which are a symbol of the struggle of the local population for their own church and education. The two sites are united under the name Revival Complex. In the school the tourists can see what the class room and the ’s office had looked like in the period 1861 – 1865. In the class room one can see the school desks of the youngest students – “sandpits”, then the school desks for writing on marble slabs, and the desks behind them had been for the mostadvanced students, who were writing on parchment sheets.

The Art gallery is also an interesting place for visiting. After the returning of South Dobdudzha to Bulgaria in 1940 the gallery was closed, and the exponents were taken to Romania. Restoration of the cultural institution began in the 1960s. Nowadays, works of art created by multiple Bulgarian authors are exhibited on an area of 800 square meters. There is a foreign art hall and other two halls which accommodate temporary exhibitions on its first floor. A central place in the foyer of the second floor is occupied by the statue of God Dionysus. Here is the permanent exposition of the gallery.There are more than 1500 works of art made by Bulgarian and foreign authors in the gallery fund.

The sea resort of Albena is situated in close proximity to Balchik. The two destinations are connected by a sea shore alley called Dambata. It begins from the yacht port, passes by the Palace and reaches Albena, as its total length is 7300 meters.

The Monastery Ak Yazala Baba – St. Atanas is situated at a distance of 16 km from Balchik, near the village of Obrochishte. The local people call it the Tekke (a dervish monastery). It was built in the 16th century, but it was visited by Christians and Muslims as well. The Muslims consider a patron of the monastery the Muslim saint Akyazala Baba. After his death the dervishes built a Tekke, around which the village of Tekiedzhik (today’s village of Obrochishte) was built. On this place the Christians honor St. Atanasius the Great. They believe that there was a monastery here once, which was turned by the Muslims into a dervish sanctuary, and St. Atanasius was murdered by the Ottomans while he was defending his faith. Nowadays visitors can see two buildings – the türbe (tomb), in the middle of which is the grave of Akyazala Baba, and the imaret – the place where the monks were performing their rituals and had accommodated travelers. The buildings have similar architecture – a construction of seven walls, with a rectangular anteroom stuck to one of its walls. The imaret roof was demolished during the war between Russia and Turkey in 1768 – 1774.

There are three modern golf courses in close proximity to Balchik. There are also other interesting places in the region – the village of Kranevo, the rock capital of Bulgaria – town of Kavarna, as well as many camping sites. The reservation of the Kaliakra fortress is also near. Balchik and the region around it offer diverse accommodation, catering and entertainment options.

There is no doubt, however, that Balchik is most popular for its possibilities for sea tourism. The beautiful beaches in the region around the town, as well as the fresh nature attract many tourists in the summer months.

Information materials about the cultural sites and Balchik are sold in all museums and the gallery.