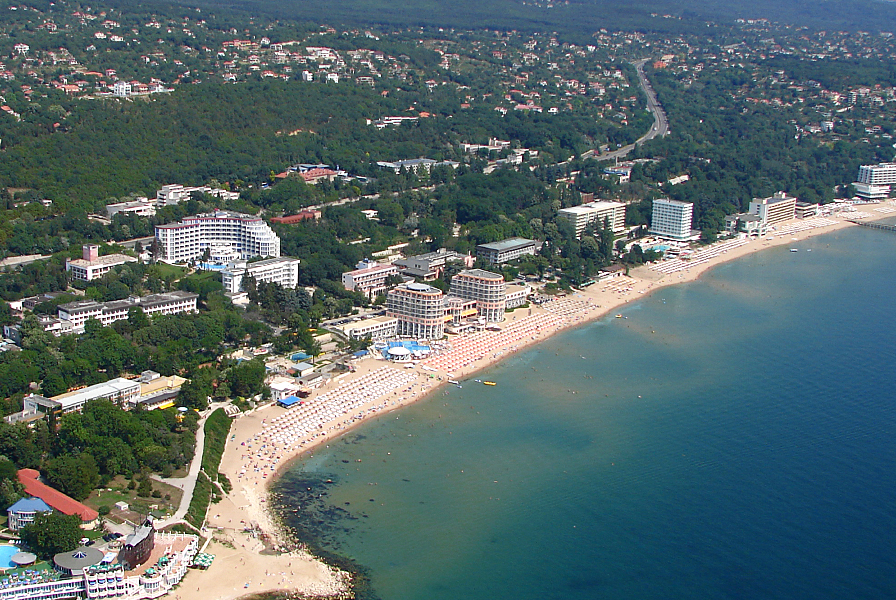 Saints Constantine and Helena is Bulgaria’s oldest resort complex. It is located 8 km from downtown Varna, between the city and The Golden Sands Resort. The area’s climate is typically continental Mediterranean, with hot dry summers; the median temperature during June is 22 degrees centigrade.

The resort is situated in a forest of deciduous shade trees, and there are 7 mineral springs within its domain. The springs are between 1,800 and 2,050 meters deep with an average constant flow of 175 liters a second, and their temperature is between 40 and 60 degrees centigrade. Thanks to these hot springs, the resort has long been one of the Black Sea coast’s most popular spas.

The resort derives its name from the venerable monastery Saints Constantine and Helena located here. Details of the monastery’s history are not known, but what is known is that it was rebuilt during the first half of the 19th century. The resort, which was already a popular tourist destination at the turn of the twentieth century, was known as The Druzhba (Friendship) Resort during the socialist era.

The beach at Saints Constantine and Helena is 3.5 kilometers long, and there are a number of hotels at the complex, from the 2-star to the 4-star category. Attractions besides the thermal baths include a dock for yachts, tennis courts, football pitches, and a variety of water sports and seaside attractions. The complex also offers stores, restaurants, bars, a post office, a drugstore, and a fitness center. Nearby is the Evksinograd Palace – the former summer residence of the Bulgarian monarchs Alexander I, Ferdinand I, and Boris III.