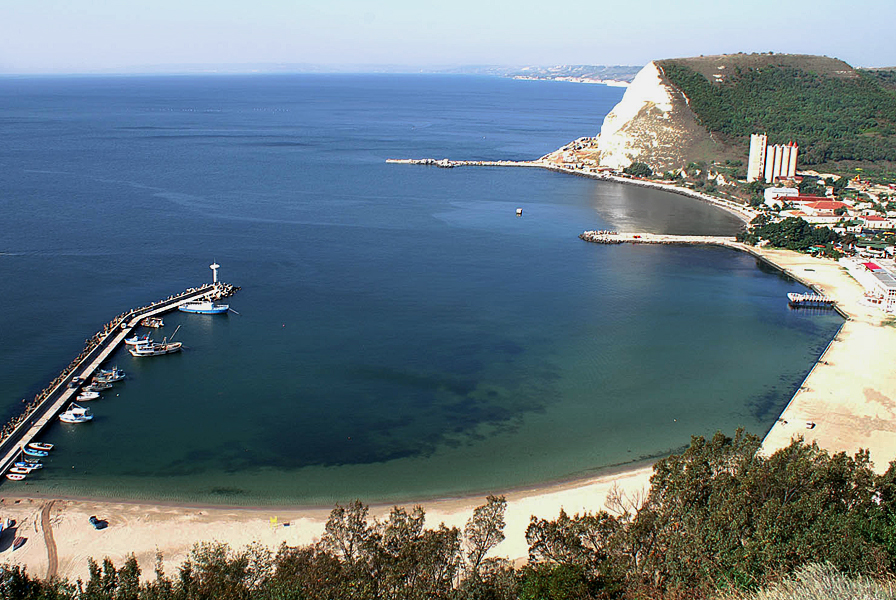 The town of Kavarna is located on a rocky shore in the northern part of the Bulgarian Black Sea Coast, 63 km northeast of Varna. The beautiful coast of Kavarna stretches over 42 km and the total beach area of the Municipality amounts to 74 000 sq m. The town’s population is approximately 11 000 people.

The evidence of human activity in the region dates back to the 3rd millennium BC. Greek settlers from Mesembria(modern-day Nesebar) set up the Bizone Colony in the region in the 5th century BC. Today the remains of a fortified wall built in the 4th century AD can be found on Cape Chirakman, 3 km south of Kavarna. During the Classical Antiquity and the Middle Ages the town was an important economic and cultural centre. In the 14th century Karvuna (Kavarna) and the nearby town of Kaliakra were the main towns of the Principality of Karvuna. After the 15th century the medieval town of Karvuna got the name Kavarna.

The town was occupied by Romania in 1913 and was restored to Bulgaria in 1940.

Today Kavarna is known as The Rock Capital of Bulgaria. Every summer the town gathers world famous rock musicians on one stage. The first Kavarna Rock Fest festival was held in 2006 and bands and musicians such as Scorpions, Dream Theater, Tarja, Doro, Heaven and Hell, Motörhead, Manowar, as well as many other famous rock musicians and bands have taken part in it to date.

The history museum of Kavarna contains finds dating from the 5th – 6th century BC to 1940. Finds of the Thracian tribes that populated the region are exhibited, as well as ones demonstrating the way of life of the Slavs and the Proto-Bulgarians. One extremely interesting exhibit can be found in the museum: a polymetal ingot, which was a pre-coin age means of exchange. The ingots were widespread during the second half of the 2nd millennium BC in the region of the Eastern Mediterranean. The museum also contains silver coins from the treasure of Tsar Ivan Alexander (who ruled in the period 1331 – 1371). Next to the museum is the restored Turkish bath from the 15th century. Dobrudzha and the SeaExhibition, which tells the maritime history of the region, can be seen there. Stone anchors, coins and a Thracian gold treasure found on the shores of Dobrudzha are displayed.

Kavarna also has an ethnographic museum exhibiting items characteristic of the lifestyle of the people of Kavarna, national dresses of different ethnographic groups and adornments. The exhibition is in a house typical of the wealthy citizens of Dobrudzha.

Some of the most picturesque beaches on the Bulgarian Black Sea Coast are located in Kavarna region. Rusalka (Mermaid) Resort and its beautiful rocky shore are just 20 km away from the town. Cape Kaliakra, the eastern-most point of the Bulgarian Black Sea Coast is also nearby. A museum is housed in one of the caves on Cape Kaliakra where visitors can learn more about the history and the development of Kaliakra Fortress throughout the years. Kaliakra is a nature and archaeological preserve; many protected species live within its boundaries; the remains of a fortified wall and a bath are preserved there as well.

The nearby village of Kamen bryag (Stone Shore) is popular among tourists as a place to celebrate July Morning. In 2007 John Lawton, lead singer of Uriah Heep, performed the band’s famous song with the same title at sunrise on the seashore. July Morning is a hippy tradition born in the socialist era as a subtle protest against the regime and as a celebration of free spirit and rock music.

2 km away from Kamen bryag is Yaylata National Archaeological Preserve, where a number of archaeological discoveries have been made. Three necropoles carved in the rocks and 101 cave dwellings from the 5th millennium BC are discovered on a territory of 300 decares. Yaylata is situated between two marine terraces. It is reckoned that the bay between them was once used as a harbour, because of the large number of anchors found on the bottom of the sea. The fortress in Yaylata was built at the end of the 5th and the beginning of the 6th century. Then it was demolished and a Bulgarian settlement was established there later during the 9th century. The preserve was entered in the Register of Protected Areas and Protected Zones in Bulgaria by virtue of Ordinance No RD-822 of 23 August 2002.

Two important wetlands lay north from Kaliakra: Bolata and Taukliman (The Bird’s Cove). Interesting water birds nest in these places, and some of the animal species are included in the Bulgarian Red Book (a list of the endangered species in the country). These are some of the destinations in the country preferred by ornithologists.

The villages of Balgarevo and Tyulenovo, and the town of Shabla are situated in the vicinity of Kavarna. In addition to its beautiful beaches and historic landmarks, Kavarna and the region attract tourists with some traditional events such as Mussel and Fish Fest, Week of the Sea, Kavarna Rock Fest, etc.