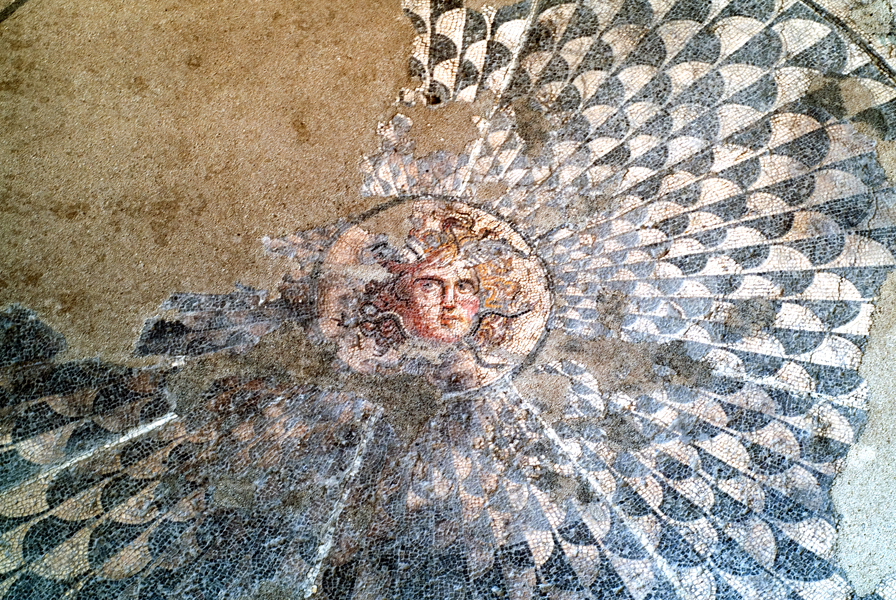 The Museum of Mosaics is located in the town of Devnya. It is an in situ museum that is housed in a specially constructed building whose purpose is to preserve the archaeological discoveries. A big Roman building with exquisite mosaics was discovered in this place during archaeological excavations carried out in 1976. The museum was constructed over some of the foundations of this building.

The ancient building dates back to the time of Emperor Constantine I the Great – the end of the 3rd century – the beginning of the 4th century. It was an urban house (villa urbana) that took up the area of a whole quarter of the Roman town of Marcianopolis which was one of the biggest towns in this part of the empire. It was designed as a typical Greek-Roman atrium-peristyle house where the inner courtyard (atrium) was surrounded on three sides by residential buildings and a colonnade.

Five of the rooms and the portico are covered in multi-colored floor mosaics – some of the best examples of Roman mosaic art found on the territory of Bulgaria. Three of the mosaics are exhibited in situ in the rooms where they were discovered, while the others were moved and placed on a new bearing structure after undergoing certain preservation procedures and partial restoration.

The mosaics are made of tiny stones – cubes of marble, limestone, baked clay, and glass painted in 16 colors. They depict mainly characters and scenes from the Greek-Roman Mythology, exotic animals and birds, floral and geometrical patterns, etc.

The mosaic that covers the floor of the living-room depicts the shield of goddess Pallas Athena which is decorated with the head of the decapitated Gorgon Medusa in the middle. The purpose of this image was to protect the owners of the house from evil and to petrify the ill-wishers with the dreadful appearance and the chilling look of the Gorgon.

The bedroom floor is decorated with another beautiful mosaic that illustrates a love scene.

The reception hall is the biggest room of the building that is decorated with mosaic. One of the central panels of the mosaic tells the ancient Greek myth of Ganymede’s abduction. So far this is the only mosaic discovered on the territory of Bulgaria depicting this scene.

The Seasons Mosaic used to cover the floor of the room for the women. Another mosaic known as Helices of Pannonia was discovered during digs in the eastern part of Marcianopolis in a building which was probably an old Christian basilica. The mosaic is decorated in repeated geometrical patterns painted in four colors.

The museum halls exhibits various materials related to the architecture of the building and the way of life of its residents.

Visitors can learn more about the exhibits if they use the services of a tour guide or request a lecture. Information materials and souvenirs are also sold at the museum.