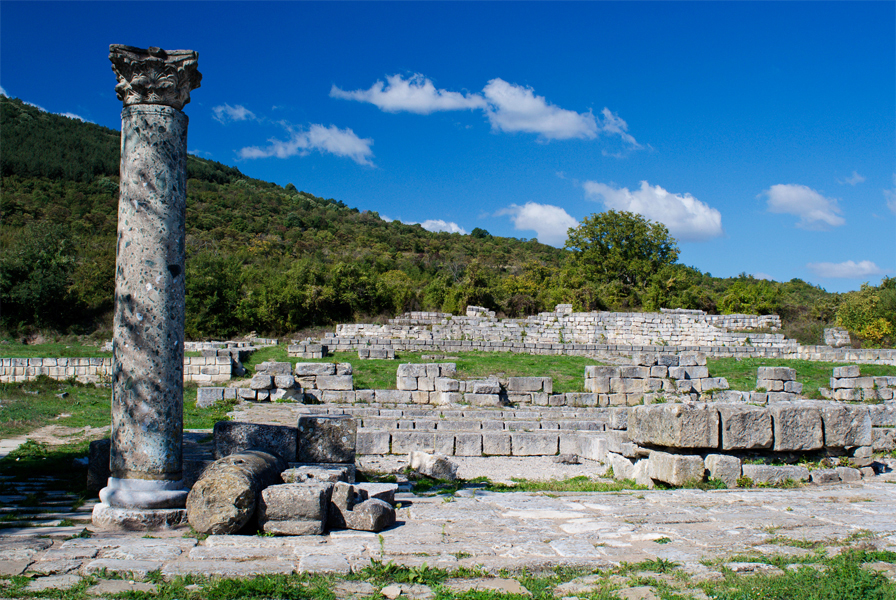 Preslav was known as a spiritual and literary centre where the development of the Slavic written language and the Golden Age of Bulgaria during the rule of Tsar Simeon I (who reigned in the period 893 – 927) took place.

In medieval Bulgaria Preslav became one of the most beautiful and grandeur towns in Southeastern Europe where significant monuments of the culture of Pliska and Preslav were later discovered.

In 970 it was conquered by Knyaz Svetoslav I of Kiev who moved the capital of Kievan Rus’ there. In 971 the Byzantines led by Emperor Ioan I Tzimiskes conquered and plundered the town. In honour of his victory the Emperor renamed the town after himself calling it with the Byzantine name Ioanopolis. Preslav remained under the Byzantine rule during the 11th and the 12th centuries. When the Bulgarian state was reestablished after the uprising of boyars Asen and Peter against the Byzantine rule, Preslav became a Bulgarian fortress again.

Just like Pliska, the fortress of Preslav consisted of inner and outer fortification systems. The inner fortress was located almost at the centre of the Inner Town. It was r-shaped and had round towers at the corners and square ones along the walls.

The palaces were built on a high plateau. The impressive remains of a palace complex consisting of two monumental buildings – Big Palace and Western Palace, have been preserved to this day. The throne hall had a nave and two aisles and was divided in three sections.

The Golden Church, built during the reign of Tsar Simeon I (893 – 927), stood on a high terrace near the palaces of Veliki Preslav. It was a magnificent monument of church architecture of the First Bulgarian Kingdom and a unique monument of Bulgarian architecture in general.

The ruler’s temple – the missing part of the palace architectural complex in Veliki Preslav, was discovered during excavations. It was located in a central spot in the Inner Town and was connected to the ruler’s palace by a straight 35 m-long street. The temple was impressive in size: 21 m by 40 m. It was built in the 10th century and was related directly to the development and construction activities of either Tsar Simeon I or Tsar Peter (who reigned in the period 927 – 969).

St. Cyril and St. Methodius Temple-Monument, built on the occasion of the 1000th anniversary since the passing away of St. Methodius and Tsar Simeon and the Archaeological Base of the Bulgarian Academy of Sciences are situated there.The temple stands in one of the quietest recesses of Veliki Preslav complex. An old pine forest hides the cloister deep in its heart. There is an alcove where tourists can sit and rest near the temple. The car park for visitors is also not far away.

Today the remains of the numerous churches, monasteries, workshops, studios and palaces can be seen at Veliki Preslav National Historical-Architectural Reserve, while the masterpieces of the ancient masters, such as painted ceramics, adornments, weapons, all significant monuments of medieval Preslav, including Preslav Gold Treasure, the ceramic iconostasis of the palace monastery, a copy of the monumental icon of St. Theodore and other valuable items, various ancient inscriptions, a unique collection of lead seals, etc., are all kept at the Archaeological Museum of Veliki Preslav. There are also hundreds of artefacts illustrating the life and the farming habits of the old inhabitants of Preslav.

Veliki Preslav National Historical-Architectural Reserve is one of the 100 Tourist Sites of Bulgaria and was declared a reserve by virtue of Ordinance No 161 of the Council of Ministers of 1958.