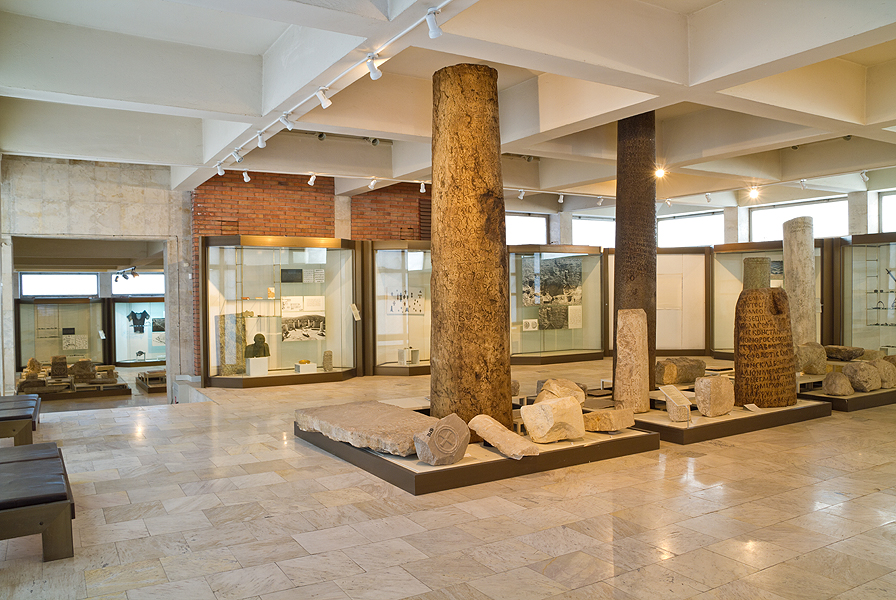 The history museum in Shumen was set up in 1857 when Sava Dobroplodni (1820 – 1894), a from the Bulgarian Revival Period, organised the first expedition to the remains of the old Bulgarian capital Veliki Preslav (Great Preslav) together with students and when they exhibited their finds in the local school.

Since 1891 the museum has been housed in a building in the centre of the town which is open for tourists even today. Shumen History Museum comprises eight permanent exhibitions presenting artefacts dated from a period between the 5thcentury BC and the 20th century AD.

The tour around the museum starts at the Prehistory Hall. Visitors will find artefacts discovered in the Shumen Region from the Chalcolithic Age and the Bronze Age there. Religious objects and clay vessels are displayed. Visitors will also be able to see a find comprising 65 clay vessels discovered in a settlement mound near Smyadovo from the 5thmillennium BC. The religious duck-shaped vessel found near Smyadovo is also one of the interesting exhibits displayed in this hall.

A 4th century BC tomb discovered near Smyadovo is displayed in the Antiquity Hall. The exhibits in this hall are from the 12th century BC – the 6th century AD. They include many everyday items, weapons, funeral objects, statuettes, a coloured mural from the basilica near Khan Krum Village, etc.

The Stone Grandmothers cult monuments dated back in the 11th century can be seen in the first hall dedicated to the Middle Ages. The exhibition begins with artefacts from the time of the establishment of the Bulgarian state discovered near Pliska and the region. Exhibits from Preslav, the first Christian Bulgarian capital, are displayed in the second hall of the exhibition. Visitors can see stone elements and painted ceramics there. Some of the other exhibits provide information about the development of Shumen during the Second Bulgarian Kingdom in the period 12th – 14th centuries. There are artefacts from Madara, Shumen Fortres, and Khan Omurtag’s Aul.

The next hall of Shumen History Museum tells about the history of Bulgaria in the period 15th – 19th centuries. The exhibition includes historic photographs, documents, and items from Shumen from the period of the Ottoman rule. Many objects demonstrating the importance of Shumen Fortress for the Ottoman Empire are exhibited. Shumen was famous for its busy markets and its numerous workshops. Special place is given to exhibits related to blacksmithery, goldsmithery, and the making of musical instruments. A special map illustrates the trade relations Shumen masters had with other markets within the empire and outside it.

In the Bulgarian Revival Hall attention is paid to the reforms that took place in Bulgarian schools. During the Bulgarian Revival Period (17th – 19th centuries) Shumen became a centre of the Bulgarian musical culture. The first Bulgarian orchestra to play European music was formed in 1850. Later Dobri Voynikov, one of the members of the orchestra, founded the first student choir and orchestra. The collection consists of photographs, scores and the baton of Dobri Voynikov (1833 – 1878). Those who want to learn more about his work can do so in his birth house which has been transformed into a museum. The house was declared an architectural and historical monument of culture of national importance by virtue of publication in State Gazette, issue No 22 of 1975.

The ethnographic part of the exhibition presents items from Shumen Region from the second half of the 19th century and the beginning of the 20th century. Among the exhibits visitors will find original male and female clothes influenced by Western European trends, kitchen furniture of the Shumen house, etc.

In 1991 a special exhibition dedicated to the Christian culture from the 17th – 19th centuries was set up in the museum. It includes icons, liturgical books, holy gates, etc.

A special hall is devoted to the rich numismatic collection of Shumen Regional History Museum. It comprises over100 000 coins, many of which are unique. The coins are arranged in chronological order.

Some of the sites of Shumen History Museum are situated in Panayot Volov Museum, Lajos Kossuth Museum, and Pancho Vladigerov Complex. The exhibition displayed in the house of Panayot Volov (1850 – 1876) tells about the revolutionary’s life. His work during the April Uprising against the Ottoman rule of 1876 is illustrated with photographs and documents in a special hall of the museum. The revolutionary’s house was declared an architectural and historical monument of culture of national importance by virtue of publication in State Gazette, issue No 22 of 1975.

Visitors can get more information about the life of Bulgarian composer Pancho Vladigerov (1899 – 1978) at the museum complex named after him. They will find the composer’s first piano and his study there.

During his exile in Shumen, Lajos Kossuth (1802 – 1894), leader of the Hungarian Revolution, lived in the house of Dimitraki Hadjipanev, a merchant from Shumen. Today his house functions as a museum which tells about the life of Kossuth and follows the development of the Hungarian Revolution of 1848 – 1849. The house was declared an architectural and historical monument of culture of national importance by virtue of publication in State Gazette, issue No 22 of 1975.

Information materials are sold in all museums. Souvenirs and scientific literature are sold at the Regional History Museum.