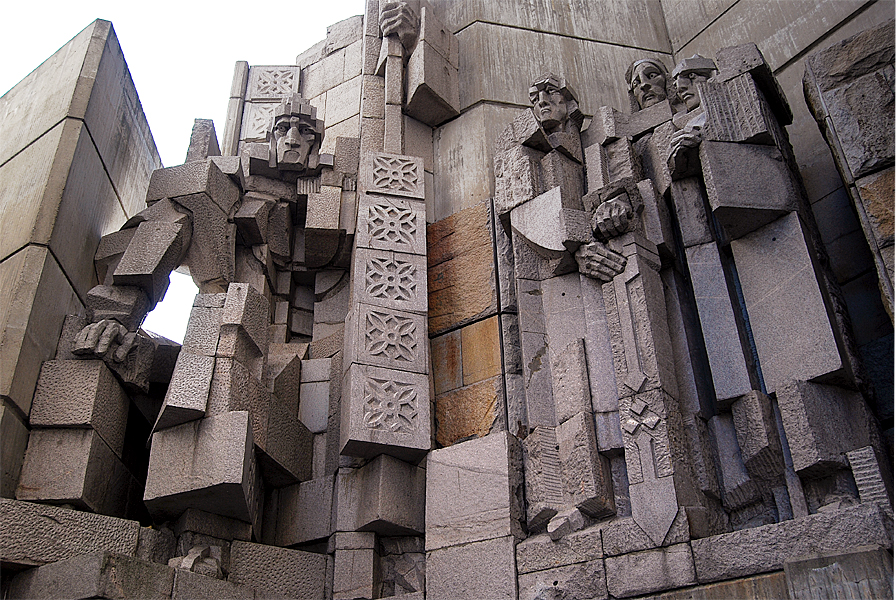 The Founders of the Bulgarian State Monument is located 6 km away from Shumen, at 450 m above mean sea level. It stands on Ilchov bair Hill on the territory of Shumen Plateau Nature Park.

The idea to build the monument was conceived in 1977 during the preparations for the celebration of the 1300th anniversary since the establishment of the Bulgarian state (681). Construction began in August 1979 and the monument was officially opened on 28 November 1981. The monument was designed and built by sculptors Krum Damyanov and Ivan Slavov, architects Georgi Gechev and Blagoy Atanasov, artists Vladislav Paskalev and Stoyan Velev, and design engineer P. Hadzhov.

The monument consists of two groups of concrete blocks separated from one another by small spaces. The biggest outdoor mosaic-triptych in Europe can be seen here. Together with 21 sculptures they symbolise the establishment, development and progress of the Bulgarian state in the period 7th – 10th centuries.

Khan Asparuh (who is considered to be the founder of Bulgaria) is depicted first, standing with his sword stuck in the ground, hands raised and pointing in different directions to where the Bulgarian state will be. His sculpture is followed by the 18 m-tall sculptures of Tervel, Krum, and Omurtag (Bulgarian khans who reigned in the 8th and the 9th centuries). They are surrounded by fragments of old Byzantine chronicles. The wise thought of Khan Omurtag is inscribed beneath them: “Even if a man lives well, he dies and another one comes into existence. Let the one who comes later, upon seeing this inscription, remember the one who had made it… And the name is Omurtag, Kanasubigi.”

A cross of light forms at the upper part of the monument as a symbol of the Christian religion which Bulgarians converted to in the 9th century.

11 figures represent the Golden Age of Bulgaria under the reign of Simeon the Great (893 – 927). The sculpture of the ruler is surrounded by men of letters, boyars, and soldiers. A reproduction of a section of the fortress wall of Veliki Preslav (Great Preslav – an old Bulgarian capital) lies opposite this composition.

The concrete panels on which the mosaic-triptych is laid are arranged at different angles so as to demonstrate the gradual development of the state.

A granite lion weighing 1000 tons is placed on the top of the memorial.

The development of the Bulgarian state is demonstrated by three different types of alphabet: the first one is runic, composed of cuts and lines used by Proto-Bulgarians and Slavs, followed by the Glagolitic alphabet created by the brothers Cyril and Methodius and ending with the Cyrillic alphabet – the writing system of all Slavonic peoples.

The Founders of the Bulgarian State Monument is 140 m long and 70 m tall. 2300 cu m of earth were excavated and 2400 tons of reinforcement steel and 50 000 cu m of concrete were used for its construction.

There are visitor information centre and  permanent exhibition to the monument. Wedding ceremonies are often performed there.