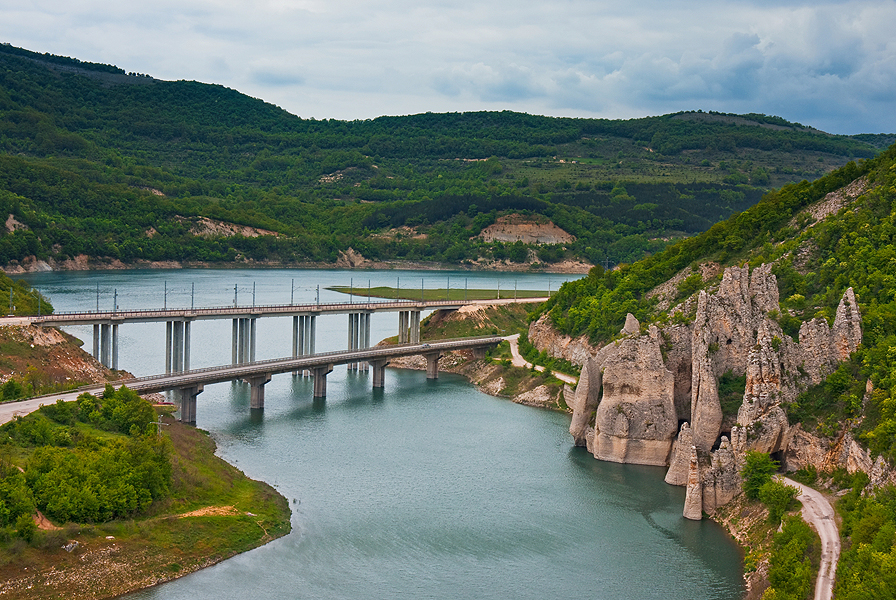 The rock phenomenon “The Wonderful Rocks” is situated at a distance of 4 km from the village of Asparuhovo, municipality of Dalgopol, county of Varna. It was declared a natural phenomenon by Decree of the Council of Ministers No 1869 of 17 February 1949, and covers an area of 12.5 ha on the shore of Tsonevo dam.

The main road connecting Provadia and Aytos, as well as the railway line Varna – Plovdiv passes in close proximity.

The Wonderful Rocks is a massif consisting of about ten beautiful rock needles, 40-50 meters high, shaped like castle towers. They were formed by the effect of water and wind on limestone. The rocks had formed directly by the banks of Tsonevo dam, where they are steepest and vertical.

The phenomenon consists of three massifs. Three tunnels are dug through along their entire length, where an automobile road made of crushed stones passes. Since they can be seen from the main road, the rocks often attract the travelers, which come by to enjoy the view.

A hut with the same name, which offers accommodation, is situated directly against the Wonderful Rocks.

A lot of interesting caves, rock massifs and holes, some of which are inhabited by large rapacious birds are situated in the region.

The rocks which have routes for rock climbing are also interesting. They are situated at a distance of 10 minutes walking from the natural phenomenon “The Wonderful Rocks”, uphill along a steep path, at the place of an abandoned quarry. The rocks have the shape of an arch, with typical ceiling in their upper part.

One of the first climbing competitions was conducted here, and 8 routes were especially designed for this purpose. Gradually the rocks were additionally equipped, and at the moment 18 routes are equipped from 6th to 10th category.

Breaking and demolishing of the rocks as well as painting them is forbidden as the territory is a natural landmark.