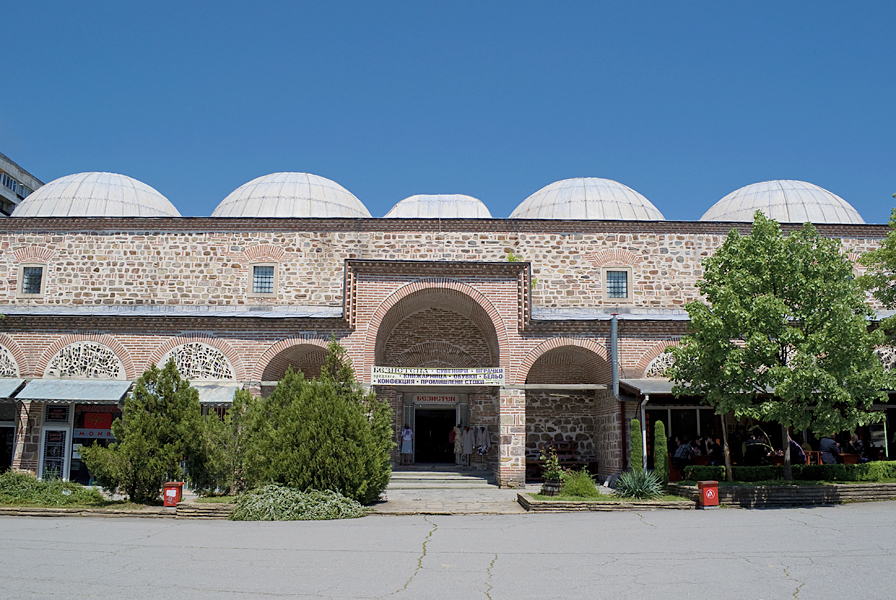 The Yambol “Bezisten” (covered bazaar) is located in the city center. It is the only such Ottoman institution still extant in Bulgaria. It was built in 1509-1510 and is one of the largest structures in Yambol.

In his memoirs of 1667, the Turkish traveler and writer Evleya Chelebi mentions the bazaar’s place in the overall architectural plan of the city: “There is a substantial bazaar with four iron doors, the only one of its kind in the country. All kinds of valuable items may be found here in the piles of trinkets.”

The bazaar’s roof, along with a semicircular tower in front of the bazaar, were covered with olive leaves. Shortly after Ottoman rule ended in Bulgaria (1878), the damaged leaves were replaced with ceramic tiles, which in their turn were replaced a half century later with a corrugated tin roof.

During the War of Liberation (1877-1878), when Yambol was one of the most important supply bases for the Ottoman army, the bazaar was converted into a warehouse to store provisions. Outside the bazaar, along all of its longer walls, there are lines of vaulted shops. On the inside, under the colorful yellow arches decorated with blue leaves, 32 merchants hawk their wares, each merchant’s shop divided from the next by a wooden partition.

In 1927, after a partial renovation to the majority of the bazaar’s interior, a number of additional structures were added, making it an even more lively merchants’ and artisans’ complex.

From 197-1973, the facility was restored so as to closely resemble its original appearance and to better adapt it to the modern city.

The bazaar is valued as one of the most beautiful in the Balkans, and as an excellent example of Ottoman urban construction for general use during the 15th to 17th centuries. Experts point out that the bazaar’s interior excellent acoustic properties make it a suitable venue for concerts.

In the past, the bazaar was the heart of the city’s commercial activity. Today it no longer serves that function, but it is still an impressive, attractive architectural monument.