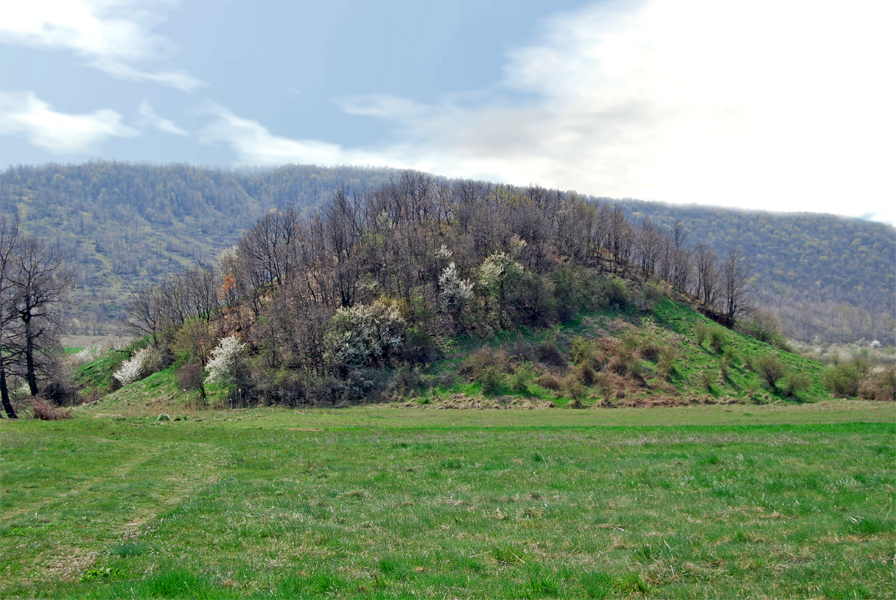 The Zhaba Mogila (Frog Mound Tomb) is located in the area of the Draganov Well a few kilometers from the city of Strelcha. It is the largest of the roughly 300 such mounds in the region and one of the largest in all Bulgaria. It has a diameter of 80-90 meters and is 20 meters high. The burial mound was surrounded by a water-filled moat 30 meters wide and 3-4 meters deep that had to be crossed to enter the sanctuary. The moat still exists, and is now filled with croaking frogs, which is how the tomb got its name.

The archeological studies in the vicinity of Strelcha that began in 1976 have disclosed that The Frog Tomb is a unique Thracian cultic complex known as a Heroon (sacrificial temple) that was divided into two parts – the mausoleum or crypt and the temple.

The crypt, which is on the southeastern side of the tomb, was excavated in 1976. It dates from the 5th-4th centuries BCE and was used during two distinct phases. The first phase was as a crypt and mausoleum for important Thracians, and at that time it was open to both visitors and worshippers. The area consists of two chambers – one rectilinear and the other circular – with a narrow passage connecting them. During the second phase of the tomb’s use, it was a burial site for a particularly important Thracian, perhaps a ruler or lord, who was buried with a four-wheeled chariot.

After this individual was buried, the tomb was sealed with a massive pile of stones. In front of the tomb’s façade stood the chariot with its two horses in harness. Most likely it was the chariot of the burial procession’s leader.

When the pile of stones was cleared away, the remains of the four-wheeled chariot were uncovered. The horses had been sacrificed on the spot and their skeletons were found next to each other in an entirely symmetrical arrangement.

At present most of the artifacts discovered at the Frog Mound Tomb are preserved in the Strelcha Museum of History.

The crypt and mausoleum are open to visitors

The Frog Mound Thracian Tomb was declared an archeological and cultural landmark by Ministerial Decree № 1711 in 1962.