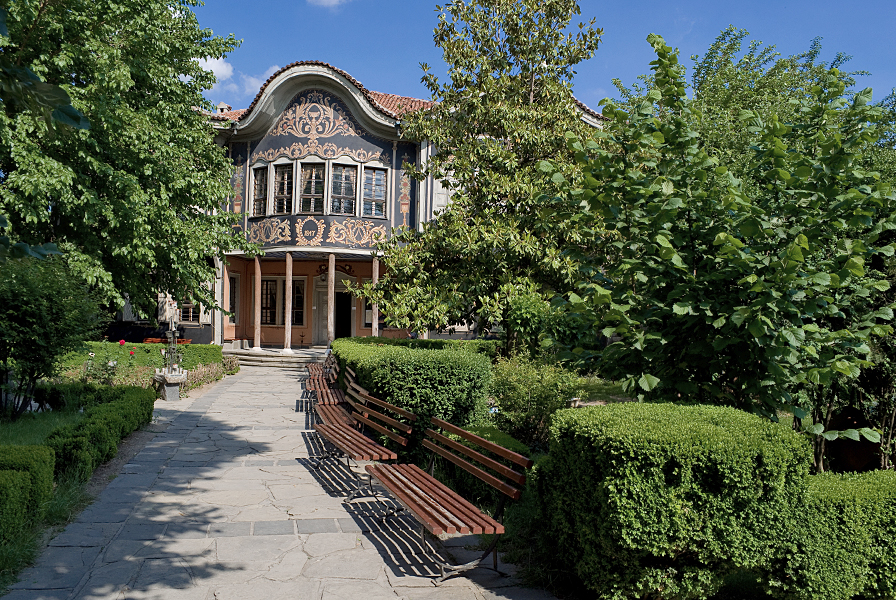 The Plovdiv Regional Museum of Ethnography is the second largest museum of its kind in Bulgaria. It was founded in 1917, and in 1938 it relocated to the Kuyumdzhiev House in Plovdiv’s Old Town, declared a cultural landmark in the 4thvolume of the State Records for 1995.

The wealth of items on exhibit represent the traditional culture of Thrace, the Rhodopes, and The Central Balkan Mountains during the Bulgarian Awakening (18th-19th centuries). The permanent exhibit of agriculture and animal husbandry demonstrate the foundational importance of these activities for the region’s population. Some of the period’s most characteristic traditional crafts on display here are the production of woolen clothing and multi-colored woolen embroidery, pottery, copper work, and wrought ironwork.

The museum also displays a representative range of the goldsmith’s art. There are exhibits of decorative plates and church salvers, traditional folk costumes, fabrics, and rugs, musical instruments and ritual objects. Typical interiors are on view from the city of Koprivshtitsa, from the Rhodopes, and from the city of Plovdiv, to convey a sense of the region’s habits and customs.

With an inventory of over 2000 photographs, the museum’s photography exhibit offers a substantial introduction to the research and visual records of life in Plovdiv and the surrounding regions – portraits, clothing, architecture, daily life, festivals, and other subjects. Most of the photographs are in black and white on cardboard and date from the beginning of the 20th century, and were taken by the most accomplished photographers of their day.

The museum includes The Plovdiv Fair, a unique tapestry completed in 1888 by Ivan Markvichka (1856-1938) – one of the first works depicting everyday life in a Bulgarian city after the country’s liberation in 1878.