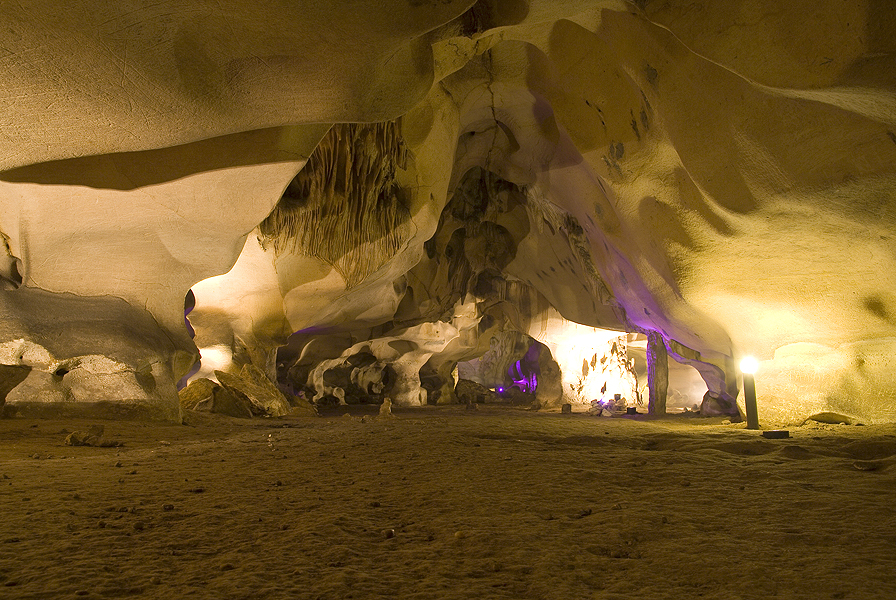 The Orlova Chuka cave is situated at a distance of about 40 km from Ruse, near the village of Pepelina. The cave was found in 1941 by a shepherd who was shepherding his flock in the region.

In 1959 in Orlova Chuka were built 124 stone stairs and an artificial tunnel was drilled, which serves as an entrance. Speleologists started examining the cave and found skeletons of cave bears. It is believed that it was inhabited by people during the Paleolithic Age and the Stone-Copper Age. The cave was declared a natural landmark by Decree No 2810 of10 November1962.

Nowadays, about 3 km of the cave are accessible and illuminated for the visitors.

Its name comes from the rock crown which stands above its entrance. The Orlova Chuka is the habitat of the bat species Rhinolophus ferrumequinum, Rhinolophus Hipposideros and Myotis blythii. In the galleries lives the bat species Chiroptera which is unique for Europe.

The examination of the cave continues to the present day.

From the artificial entrance of Orlova Chuka one can enter the first cave hall. It is called Concert Hall because of its good acoustics, and often concerts are performed inside it. Every year in August during the Cave Celebration bands are performing a festal concert. Namely, the Great Stalactite which is 3.5 meters high and 50 cm in diameter is located in the Concert Hall.

There are many other interesting formations in the cave – the Dinosaur, the Owl, the Turtle, etc.

In the Large Gallery, which is situated to the west of the Concert Hall, there are multiple beautifully shaped sinter lakes.

The largest and the best laid out hall is the cave called The Big Screes. There are sinter formations on the walls, and when you look at them carefully, you can differentiate interesting forms imitating a snake, a football player with a ball, etc. On the bottom of the hall there are stone blocks which had probably been demolished during intensive earthquakes. On the bottom there are a lot of remains of bat compost, because the hall is one of their favorite habitats in the cave.

The hall called The Small Screes is situated next to the Big Screes. To the west of the main gallery begins a tunnel, at the end of which is situated the Cosmic Hall.

A tunnel is formed by the small hall called “Rest”, in the end of which there are calcite crystals, which look like cracks.

People enter the cave in groups (not more than 15 people) at every round hour. Taking pictures in the cave is allowed, but lighting of fire, disturbing the animals which inhabit the cave, as well as visiting the raw galleries of the cave is forbidden. It is also forbidden to visit the cave within the period of 1 November – 1 April; and during the rest of the year the tourist visiting is only allowed within the time between 9 am and 5 pm. Information materials and souvenirs are sold in the site. People enter the cave only accompanied by a tour guide.