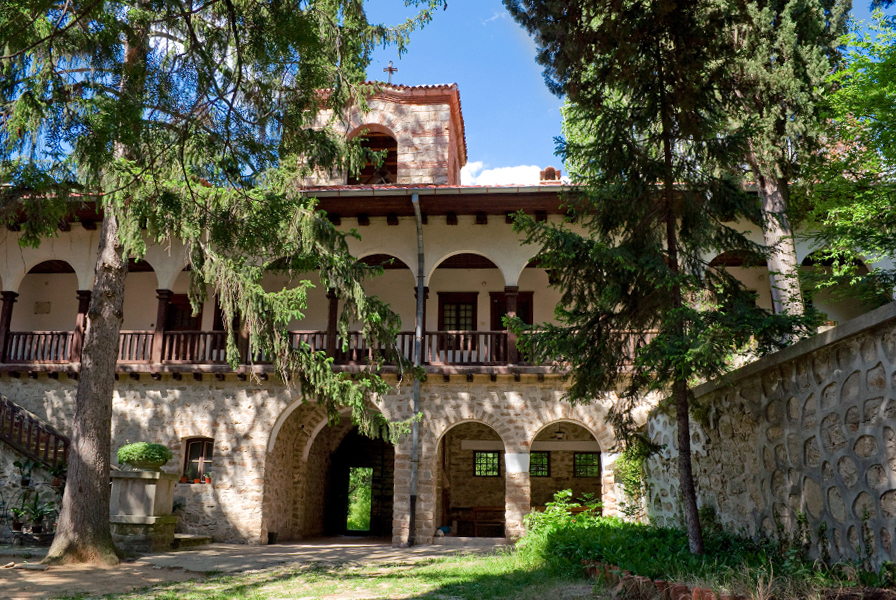 The monastery complex includes a church, living quarters, stables, and two chapels – The Saints Peter and Paul Chapel and The Archangel Michael Chapel.

The monastery is recognized by all three of these names: The Saint Nicholas Monastery, The Saints Peter and Paul Monastery, and The Archangel Michael Monastery. The oldest object at the monastery is a censer on which there is a Greek inscription dated 1233, which was during the reign of Tsar Ivan-Asen (reign 1218-1241), so the history of the monastery has some connection with the Second Bulgarian Kingdom (1185-1393).

After the invasion of the Ottoman Turks during the 14th century, the monastery was often plundered and burned, and then rebuilt.

In 1834, the current church at the monastery was erected, which is a single-nave, single-apse construction without a cupola. A point of interest in the church is that some of the Bulgarian saints depicted by the masters on the church’s icons are wearing traditional Bulgarian clothing.

During the Russo-Turkish war (1877-1888), the Ottomans again set fire to the monastery, but the local residents were able to rebuild it in just a year and a half.

The monastery maintained a school for rug weaving, and it also provided shelter for revolutionaries who fought to liberate the country from the Ottomans. Vasil Levski (1837-1873), known as an apostle of the Bulgarian revolution, stayed at the monastery on several occasions.

In 1922, the monastery was converted into a convent, and there are still a few nuns living on the premises.

The monastery offers accommodations for a few visitors. Reservations should be made in advance. The rooms are basic, without showers or toilets.

There is a trail leading from the monastery to the Vinishki Rock Nature Reserve, where an icon dedicated to The Holy Trinity has been carved into the cliff face.