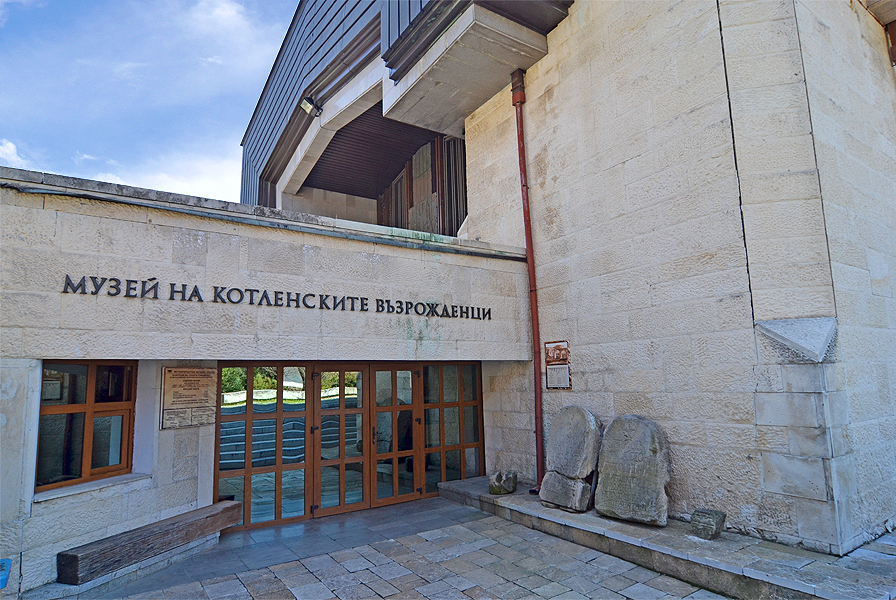 A point of interest in the city of Kotel is the exhibition dedicated to the Kotel Awakening in the building that also houses the Georgi Stoykov Rakovski Pantheon. It opened in 1981 on the occasion of the 1,300th anniversary of Bulgaria’s founding.

The Kotel Awakening exhibition is spread throughout four halls at the museum – the Halls of the Awakeners, Enlighteners, Agitators, and Revolutionaries. The exhibit displays unique examples of Kotel’s literary and scholarly development during this period.

In the first hall, “The Awakeners,” there is an exhibit on the life and work of Sofroniy Vrachanski (1739-1814) that includes invaluable manuscripts and personal effects belonging to this eminent Kotel resident, covering a span of more than 20 years. On display is one of Bulgaria’s first printed books, along with the first copy of Paisiy Hilendarski’s History of the Bulgarian Slavs prepared by Vrachanski in 1765. The reconstructed school, with its cell to incarcerate those found guilty of infractions, gives visitors a glimpse of Bulgarian educational practices in the middle of the 19th century.

The second hall, “The Enlightener,” follows the renaissance of Bulgarian literary activity. Thee is a copy of the first Bulgarian periodical, Lovers of the Word, along with books by respected writers from Kotel such as A. Granitiski, N. Bozveli, St. Izvorski, and A. Kipilovski. There is a copy here of Petar Beron’s first Bulgarian primer, published in 1824, which began a new era in Bulgarian education. Dr. Beron was Bulgaria’s first professional educator, resolutely labored to offer Bulgarian students an internationally education in their native language. The museum preserves his heart in a balsamic resin as a relic.

The third hall, “The Agitators,” includes a rich collection of firearms and swords owned by the freedom fighters Captain Georgi Mamarchev, Captain Valkov, and Gadzhal Voyvoda. One of the most valuable items here is the seal owned by Captain Mamarchev, who was Rakovski’s uncle. The captain was a chief organizer of the Kotel Uprising of 1829 and the commander of the Velchova Detachment.

In the fourth hall, dedicated to revolutionaries, there is an exhibit tracing events in the life of Georgi Rakovski (1821-1867), including his pamphleteering and revolutionary activity. Photographs, documents, and facsimiles illustrate his key role as leader and president of the Belgrade Legation. One of the most interesting objects here is the bronze sculpture Resurrection, conveying the revolutionary hero’s immortality. On display here are the revered patriot Rakovski’s sarcophagus, his daily journals, and his personal weapons, along with a collection of weapons from The Russo-Turkish War (1877-1878).