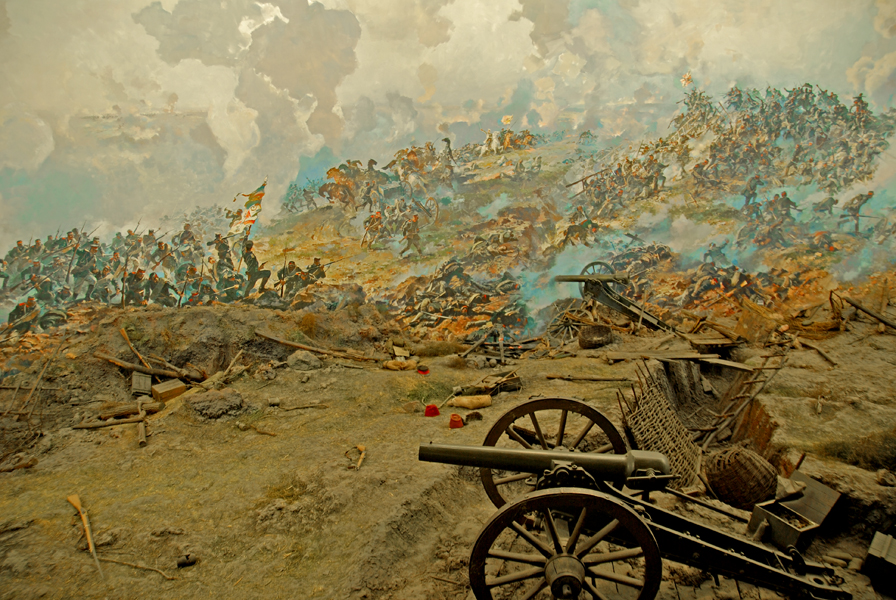 The Pleven Epopee 1877 Panorama is the only monument of its kind on the Balkan Peninsula. It was built in 1977 on the occasion of the 100th anniversary since the liberation of Pleven from the Ottoman rule. The monument stands on the actual battlefield, in Skobelev Park Museum in the southwestern outskirts of the town. The liberation of Pleven was a turning point in the Russo-Turkish War of 1877-1878.

The building of the monument was completed in just 11 months. It is shaped as a truncated cone that lies on four stylised bayonets. The three horizontal rings that encircle the whole building stand as symbols of the three battles of Pleven, while the ring with the bayonets symbolises the siege of the town.

The panorama hall is 40 m in diameter. The 115 m-long and 15 m-wide panorama canvas that shows the dramatic episodes of the Third Battle of Pleven is hung there. The atmosphere of the trenches is reproduced at the foot of the canvas with replicas of typical objects and weapons from the period.

The diorama hall is smaller than the panorama hall and the canvas that hangs in it depicts the last battle for Pleven that took place in the valley of the River Vit on 10 December, 1877. The canvas is sized 17 m by 5 m.

Two paintings in the conclusion hall depict the capitulation of Osman Pasha and the winter crossing of the Balkan (Stara planina) by the Russian army.

Information materials and souvenirs are sold at the Panorama.